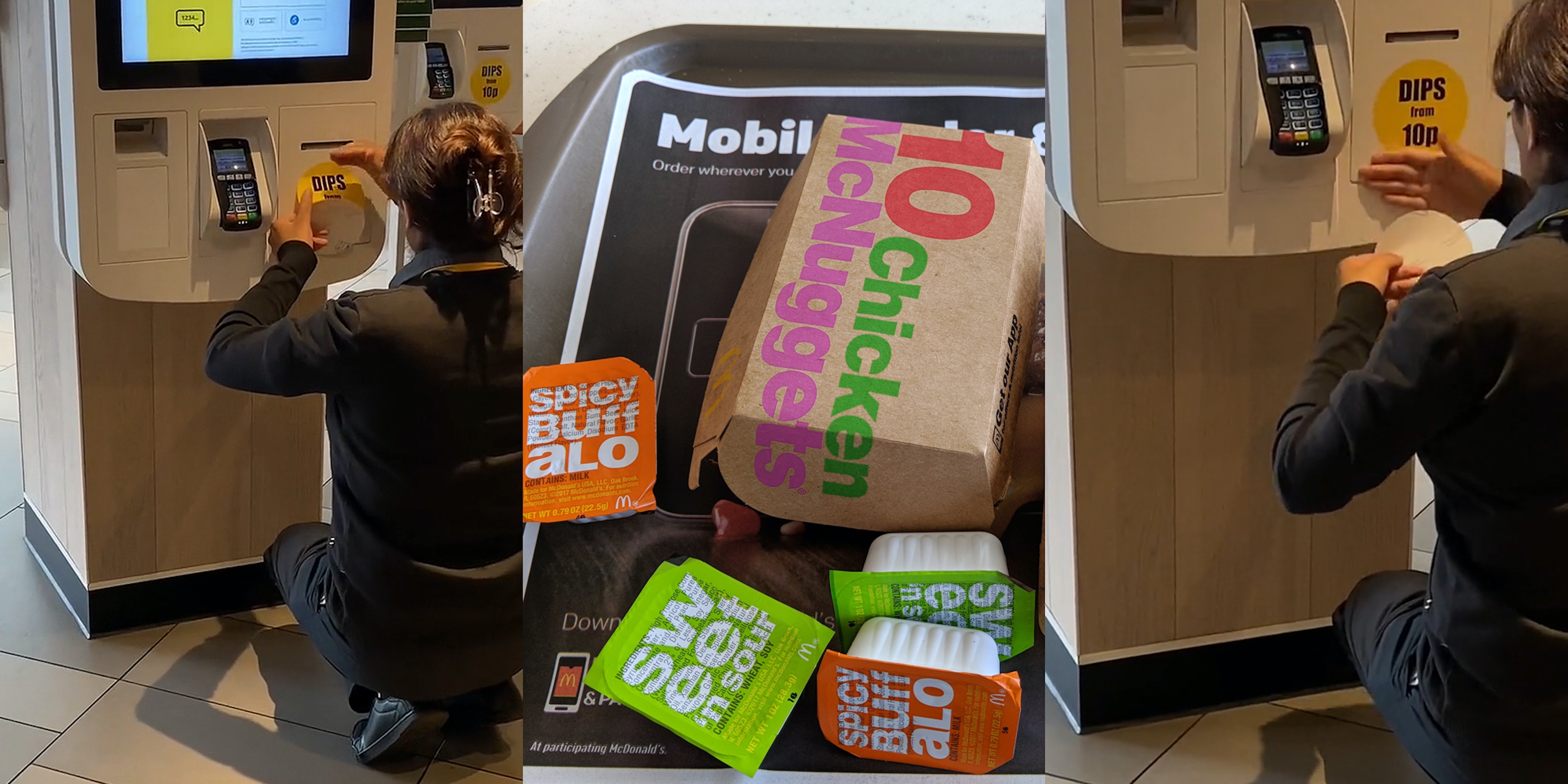 ‘They got the audacity to charge you for something you never get’: McDonald’s is now charging for dipping sauces on 10-piece nuggets

'Wouldnt mind but then they forget to put them in even when they are on the receipt!'

The 5-second clip was captured by Samantha Butler (@butler458) as she filmed a McDonald’s employee taping something onto the McDonald’s kiosk. The yellow circle sticker reads in black bold letters, “Dips from 10p” in front of the money dispenser. Even Butler was shocked as she captioned the video, “McDonald’s charging 10p for dips now.” In the hashtags, it states this McDonald’s is in the United Kingdom.

The video amassed 9.7 million views since it was posted on yesterday, with many viewers annoyed by this new policy since McDonald’s is notorious for forgetting utensils, including dipping sauces.

“They got the audacity to charge you for something you never get,” one viewer complained.

“They will still forget to put them in the bag,” a second agreed.

“they can’t even get my order right yet they have the audacity to try and charge for dips?” a third asked.

Some didn’t mind this new change if McDonald’s remembered to put the dipping sauces in the bag.

“wouldnt mind but then they forget to put them in even when they are on the receipt!” one stated.

“Wouldn’t mind if they actually did their job and put it in the bag but guarantee you’ll pay and still get non,” a second agreed.

“i mean if they didnt forget it every time i wouldn’t be at the counter asking every time,” a third said.

According to other viewers, this is nothing new. Some locations already charge for dipping sauces.

“It’s been like this for years, depending on the franchise manager they can charge what they like above or below R.R.P for some meals and condiments,” one shared.

“They were already charging for them when you order a delivery,” a second wrote.

“Dips in the Netherlands are around €0,60 cents,” a third commented.

“dips always cost 10p, its just most stores don’t enforce it. my old store did it for select sauces only (the big sauces,” a fourth echoed.

According to the Daily Mail, this phenomenon isn’t new in the United Kingdom. Since most McDonald’s are franchises, they determine what to charge for and how much. Since 1974, some branches choose whether to charge for dipping sauces. “A significant proportion of our restaurants are owned by franchisees who set their own prices. Some charge for extra sauces if they are not part of a meal option. Meal options that come with sauces include Chicken McNuggets, Chicken Selects, and some promotional side offerings such as Wedges, Crisscuts, Mozzarella Dippers, and Onion Rings,” per Mirror.

The Daily Dot reached out to Samantha Butler for comment via TikTok comment and McDonald’s via email.