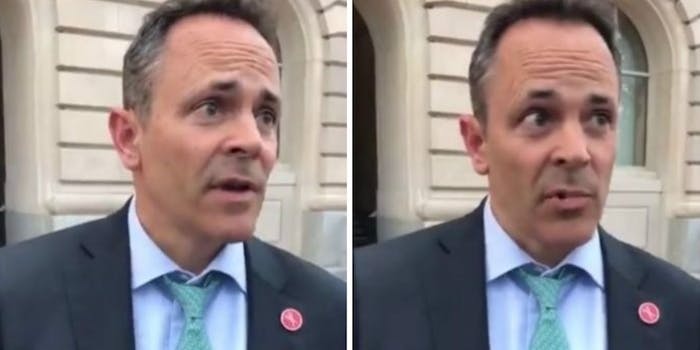 Republicans and Democrats are outraged by his comments.

In response to thousands of statewide teachers that left their classrooms on Friday to protest in the capital city of Frankfort, Kentucky Gov. Matt Bevin blamed the educators for a hypothetical sexual assault on a child left home from school.

The teachers were protesting for their retirement benefits and for more education funding from the state, reportedly causing more than 30 school districts around the state to close due to the lack of available teachers, according to the Lexington Herald-Leader. Bevin, a Republican, responded by saying, “I guarantee you somewhere in Kentucky today a child was sexually assaulted that was left at home because there was nobody there to watch them.”

He also said other children were poisoned and that some probably took drugs for the first time.

Kentucky Gov. Matt Bevin on the teacher rallies today. “I guarantee you somewhere in Kentucky today a child was sexually assaulted that was left at home because there was nobody there to watch them.” pic.twitter.com/Q4PpzFsTt2

Unsurprisingly, Kentucky lawmakers and observers, from both sides of the aisle, ripped the governor for his remarks.

“There are no words,” Kentucky Education Association President Stephanie Winkler said, via the newspaper. “My mouth was hanging open and I don’t even know what I can tell you.”

The disgusting comments by Gov. Bevin insinuating that a peaceful protest by teachers would lead to sexual assault are reprehensible.

From radio personality Matt Jones, a Democrat who is poised to challenge Mitch McConnell for his U.S. Senate seat:

1/3 “Gov. Bevin’s comments last night saying teachers rallying in Frankfort led to children being sexually abused are morally reprehensible and must be condemned by all Kentuckians.

Last month, Bevin signed a pension reform bill that, according to the Louisville Courier-Journal, moves “future teachers from the current traditional pension plan with defined benefits into a new ‘hybrid’ cash balance plan that includes features of both a traditional pension and a 401(k)-style savings plan. And it limits the impact of sick leave payments on retirement benefits to the amount of sick leave accrued as of Dec. 31, 2018.”

Democrats complained they didn’t have time to read the bill before it passed the General Assembly, and teachers said it would prevent future possible educators from going into the field.

Beshear, a Democrat, has since filed a lawsuit to stop the law from becoming a reality.

Last year, Bevin signed into law a bill that allows LGBTQ students to be excluded from school organizations, clubs, and extra-curricular programs based on religious grounds.

Update 2:16pm CT, April 15: Bevin apologized in a video released Sunday, saying “The words that people say can have unintended consequences. I apologize for those who have been hurt by the things that were said … it was not my intent.”