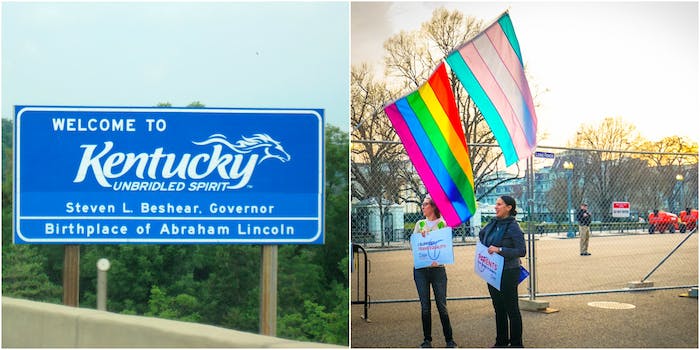 Now, religious or political clubs can bar LGBTQ students from their organizations.

As the Lexington Herald-Leader reports, the new law allows Kentucky students to share their political and religious values as free speech, insuring that “the public school can be a place where religious and political ideas can be expressed without fear of suppression.”

“No recognized religious or political student organization is hindered or discriminated against in the ordering of its internal affairs, selection of leaders and members, defining of doctrines and principles, and resolving of organizational disputes in the furtherance of its mission, or in its determination that only persons committed to its mission should conduct such activities. The expression of a student’s religious or political viewpoints in classroom, homework, artwork, and other written and oral assignments are free from discrimination or penalty based on the religious or political content of the submissions.”

By granting “recognized religious or political” organizations the ability to select “only persons committed to its mission,” such organizations across the state will effectively be able to ban LGBTQ members based on their beliefs. Many LGBTQ advocates fear this kind of exclusion could lead to bullying, harassment, and social ostracization.

“No student should fear being excluded from a school club or participating in a school activity because they are LGBTQ,” Sarah Warbelow, the Human Rights Campaign’s legal director, said in an official statement. “While, of course, private groups should have the freedom to express religious viewpoints, they should not be able to unfairly discriminate with taxpayer funds.”

The bill was originally introduced after a Johnson County school district stripped a Bible verse from a school rendition of A Charlie Brown Christmas. Despite protests from community members, the ACLU of Kentucky defended the school district’s commitment to “honoring its constitutional obligation to protecting students’ freedom of religion and belief” in schools.