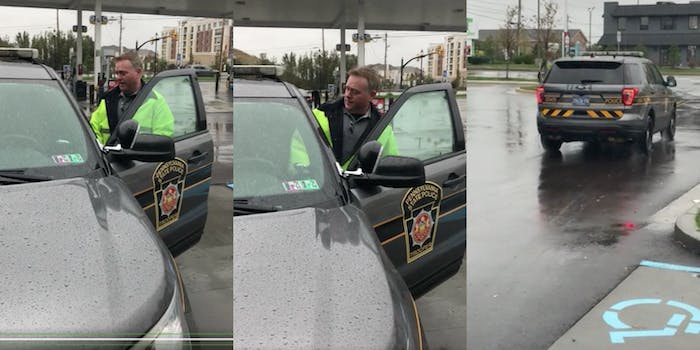 'You are a coward, sir! And you're endangering lives.'

A video trending on Reddit shows a Pennsylvania state trooper scurrying away after a citizen slams him for not wearing a mask in a local convenience store.

As the videographer is filming him at Royal Farms convenience stop, the state trooper is heard saying, “Alright, I’m leaving.” The two had already apparently been in a contentious conversation about the trooper not wearing a mask.

The trooper quickly jumps into his SUV and drives away.

The videographer, who posted the video on Reddit as u/Swingstar731, replies: “You are a state trooper, and you’re not wearing a mask inside a Royal Farms. And you’re driving away, not giving me your name. You are a coward, sir! And you’re endangering lives.”

“Yep, right up online,” he concludes.

He also had time to dig into the comments section of his video.

Replying to a comment, he added: “He pretty much ran away like a scared baby. When we were in the royal farms he started mouthing off to me like ‘watch who you are talking to buddy I’m a state trooper’ and then when he realized I wasn’t scared of him he bolted.”

One redditor, u/JimBobDwayne, wrote: “I guarantee he’s wearing a bulletproof vest. Which just goes to show he’s ignorant of what’s really killing cops. So far, in 2020, Covid has killed more than 3 times as many cops as gunfire.”

He posted a link from Officer Down Memorial Page, which shows statistics for police officer deaths for the current year. As of Wednesday, ODMP shows 234 “line of duty” deaths. 130 deaths, or roughly 56%, resulting from COVID-19 infections.