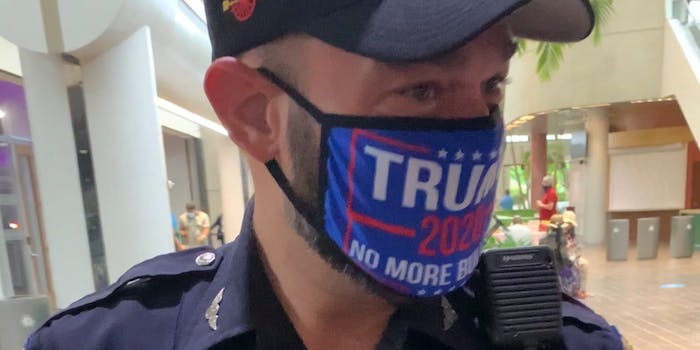 The Miami Police Department said he will be 'disciplined.'

The Miami Police Department said it will discipline an officer after he was seen in a viral photo wearing a pro-Trump face mask near an early voting site Tuesday morning.

The officer, who has been identified as Officer Daniel Ubeda, was in full uniform and was wearing a mask that read, “Trump 2020” and “No More Bullsh*t.” He is now being accused of voter intimidation by people online.

“Here is @CityofMiami Police Officer Daniel Ubeda, in full uniform with badge and gun wearing his Trump mask inside of the polling location in government center,” he wrote. “This is city funded voter intimidation.”

The Miami Police Department said on Tuesday Tuesday that it is aware of the photograph. “This behavior is unacceptable, a violation of departmental policy, and is being addressed immediately,” the department said.

Miami Mayor Francis Suarez called the officer’s actions “inappropriate” in a statement, according to NBC Miami. “A police officer is supposed to be impartial, irrespective who the person was, whatever sign it is,” Suarez said.

Suarez said on Twitter that the officer violated department policy. “He is under investigation and disciplinary measures will be taken,” he wrote.

Miami Police Chief Jorge Colina reiterated to the Miami Herald that Ubeda will be disciplined.

It is unclear what disciplinary action will be taken against Ubeda.