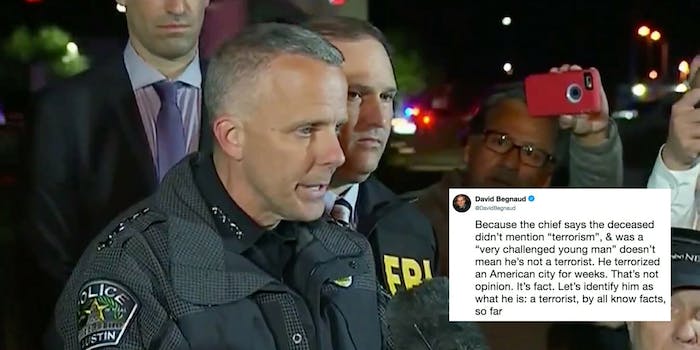 Many wonder if authorities would use these same words to describe a person of color.

The internet is in revolt after Austin Police Chief Brian Manley told press on Wednesday that a video confession of 23-year-old Mark Anthony Conditt, the Austin bomber who killed two people and injured others over the course of 19 days, depicted him as a “very challenged young man.”

At a press conference in the day following Conditt’s death, Manley said Conditt had recorded a 25-minute-long cell phone video confessing to the crimes. However, while the media and onlookers speculated that Conditt’s motive was terroristic or racist—as he initially targeted Black and Hispanic families with package bombs—Manley said the video did not mention anything about terrorism and hate.

Manley did, however, say that Conditt’s confessional was “the outcry very challenged young man,” and that, in the video, he talked about personal challenges in his life that “led him to this point.”

For many of the people who have time and again watched white male criminals be called “deeply troubled” while people of color are targeted and racially profiled as if they are terrorists, having authorities describe Conditt as a “very challenged young man” wasn’t going to cut it.

Um, no, it is a video statement of a terrorist claiming responsibility for the attacks. https://t.co/1zPLM5rUnz

While Conditt’s life may very well have been filled with “challenges,”  something that critics didn’t deny, Manley’s characterization of someone who murdered innocent people felt very out of place. Many critics elaborated on their hope that brown and Black people would one day be given the same opportunity to be labeled as “challenged” for similar acts of violence.

They don't want to call Austin's white terrorist a terrorist.

Do you remember how the media, right wing media especially, covered the story of the brown 14 year old, Ahmed, who brought a clock into his Texas school to show his teacher?

Once, before I die, I'd like to hear a cop or prosecutor declare — and mainstream media report — that the confession of a black- or brown-skinned suspect to a crime of violence is "the outcry of a very challenged young man, talking about challenges that led him to this point." https://t.co/m0st3rvUyL

A white guy places bombs all over a city
GOP: "He was a very challenged individual."

A darker skinned guy brings a clock to school
GOP: "He might be the leader of ISIS."#MarkAnthonyConditt

And THIS, ladies and gentlemen, is why minorities and people of color feel they way they feel about the fairness of the "system." This terrorist would not be called a "challenged young man" if he were black, or mexican, or muslim, or middle-eastern, or asian.

And some joked that the phrase “very challenged young man” was a coded word for “white,” reflecting just how frequent the motives by violent white men such as Conditt and Las Vegas shooter Stephen Paddock aren’t defined by law enforcement as terrorism-based.

“Ter•ror•ist: a person who uses unlawful violence and intimidation, especially against civilians, in the pursuit of political aims.”
“Very challenged young man: a white man who has publicly said racist and anti-gay remarks then kills people with bombs” https://t.co/xJdjNr5lo1

“what color do you want to paint the wall?”

New vocabulary PSA to folks planning to visit the US:

We don't want you to be confused

David Begnaud, CBS correspondent, pointed out that Conditt might not have described terroristic motives, but that what he did to the city of Austin was undoubtedly terrorism, though domestic. (The federal government’s definition of domestic terrorism includes the intention to intimidate or coerce civilians, or government conduct or policy.)

As defined by FBI: “Domestic terrorism: Perpetrated by individuals and/or groups inspired by or associated with primarily U.S.-based movements that espouse extremist ideologies of a political, religious, social, racial, or environmental nature.” https://t.co/cvPLRLJ8X9

Toward the end of the press conference, Austin Mayor Steve Adler thanked and congratulated law enforcement, calling upon residents to get to know the people in their communities better.

“The legacy of this event for us should be that we walk across the street and introduce ourselves to our neighbors,” Adler said. “We should know our neighbors better than we do.”

Police said they will not be releasing Conditt’s video at this time, so we may never know what exact “challenges” he was indeed facing.

Update 3:35pm, March 22: Manley responded to critics who took issue with his description of Conditt as “challenged” on Thursday, saying that this characterization was not his personal opinion but a reiteration of how the bomber described himself.

“In no way am I going to be sympathetic toward someone who murdered people in our community,” Manley told local station KVUE. “What my comments were, were a reflection of what his comments were. They are not my belief, they are not my opinion. What I was trying to convey to the community was what I heard in his words. And so I do understand that there were folks that were concerned about that. This man created terror in our community by his actions, undoubtedly. And that is my opinion. And what I was doing in that press conference was trying to describe what he said — how he described his life. There is no way I would ever try to mitigate his actions and my heart is with the families in this community that lost lives or had lives forever changed as a result of his acts.”

Manley also said police may eventually release Conditt’s video depending on the outcome of the investigation.