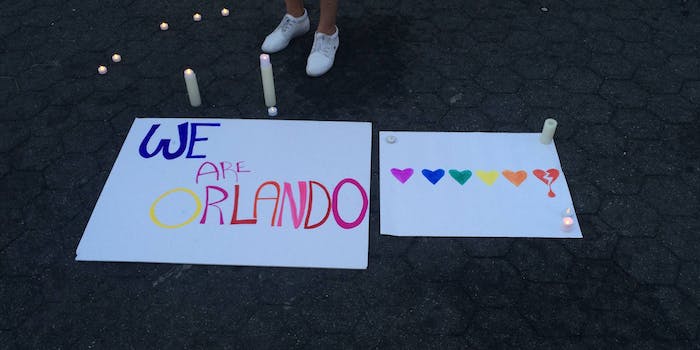 Stonewall vigil breaks out into a march for Orlando victims

Sunday was an emotional onslaught for the LGBT community.

No one saw it coming.

On Sunday morning, after many in the LGBT community had spent the night before out partying and celebrating pride in clubs and at festivals, we all woke up to the devastating news of a massacre in Orlando, Florida.

Over 50 members of the LGBT community, mostly young Latino men, were killed—and countless others lay injured and hospitalized in Orlando—after the mass shooting inside Pulse, a popular gay club.

While the entire country is heartbroken over the worst mass shooting in U.S. history, the LGBT community is on an emotional roller coaster, rocketing through rage and sadness and terror. Across the nation, people took to the streets to process grief, show solidarity with the Orlando victims, and scream with anger in a world still homophobic enough to drive a terrorist attack on a gay nightclub.

In New York, the Daily Dot captured photos and videos of a gathering outside the Stonewall Inn—the historic LGBT landmark where the Stonewall riots took place in 1969 in opposition to police harassment. 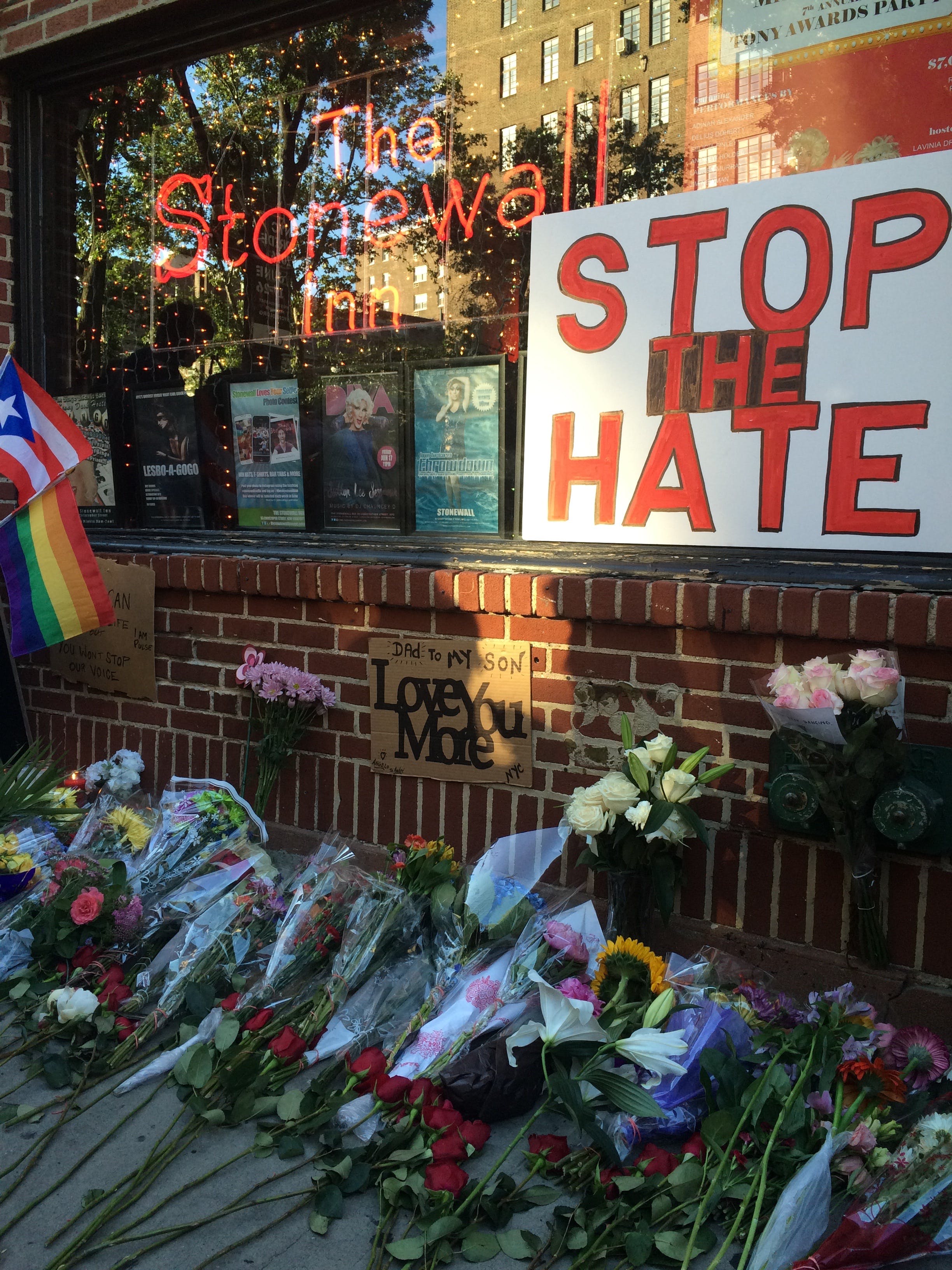 About an hour after the gathering began—driven by social media and the community’s desire to come together—an impromptu march broke out, traveling from Stonewall Place up 7th Avenue, then crossing 14th Street and ending at Union Square.

The march, which quickly streamed into the street and blocked traffic, was ignored by police and allowed to continue despite a lack of permit. At one point, the march even passed numerous NYPD vehicles; none stopped to interact or attempt to block the march.

Protestors screamed “Orlando, we got your back!” and “What do we want? Justice!” When the march reached Union Square—in one of the most populated, high-traffic parts of Manhattan—protestors laid in the street to block cars. As police began to approach, one turned and yelled: “Arrest us! Just try it! Stonewall was a riot!”

After the march reached Union Square Park, it merged with a standing vigil there. On the pavement, 50 candles were laid out in a circle and vigil-goers held signs with the names of the victims who had been identified that afternoon. Protestors from the march were encouraged to take candles and form a circle in a moment of silent reflection on the lives lost.

Vigil at Union Square Park with 50 candles, names of those killed #WeAreOrlando pic.twitter.com/Mnb76VSQEI

Vigil at Union Square: a circle of candles and impromptu speakers #WeAreOrlando pic.twitter.com/tFA5h0KMld

Many of the attendees laid down the signs and posters they had carried in the march; one long paper banner read, “Our grief is not a cry for war.”

LGBT grief is not a cry for war (at Union Square) #weareorlando pic.twitter.com/6DBHGAjR0o

After the moment of silence, a megaphone was passed around for anyone from the LGBT community who wanted to share their feelings and personal reflections. One speaker spoke beautifully about being rejected by family for being gay but then received an unexpected apology from his mother after the Orlando shooting.

The personal testimonies were shared into the night. As the sky grew dark, people continued to tell their stories: from young teens who had just come out as LGBT to mothers of gay men who offered their love to the community to lesbians who spoke about being afraid to hold their girlfriends’ hands.

As marchers shared thoughts and feelings in Union Square, another vigil was taking place in the West Village on the steps of Judson Memorial Church, where an interfaith coalition of religious leaders offered prayers and words of comfort.

At Judson Church, prayers and songs were led by Christian, Jewish, and Muslim figures. Rev. Ann Kansfield, an openly lesbian pastor who is also New York’s first gay Fire Department chaplain, spoke with local news station Pix 11 about whether she thought the Orlando massacre would scare LGBT people back into the closet.

“It’s moments like this that we realize that the fear of the things we’re going to lose, or that we might lose by coming out,” said Kansfield while standing on the steps of Judson Church, “it melts away.”