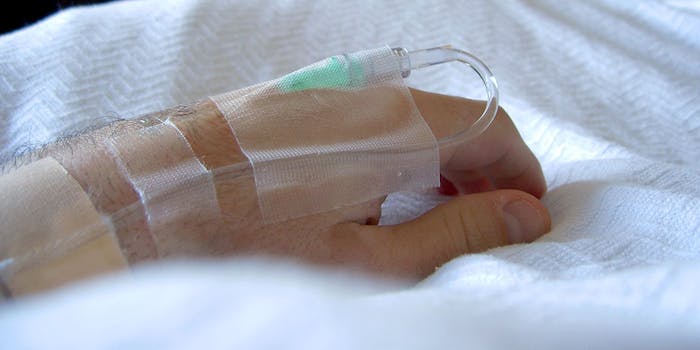 It was Jason Mortensen’s fifth surgery in six years. This time it was to repair some residual tears from a prior hernia surgery. Each time Mortensen’s wife has been by his side, waiting for him to wake from his anesthesia. After this surgery, though, she got a pleasant surprise.

“Did the doctor send you? Man, you are eye candy,” a confused Mortensen says while trying to munch on a cracker. “Whoa. You may be the prettiest woman I’ve ever seen. Are you a model? Who are you?”

“My name is Candice. I’m your wife,” she responds.

This insanely cute scene was caught on video and uploaded to YouTube, where it has collected more than 478,000 views thanks to a top post on Reddit’s r/videos forum.

“PLOT TWIST: this women is actually a nurse and fucks around like this with all her patients,” ze_neckbeard commented on Reddit.

“[T]otally fake but awesome, he blew it when he called her ‘baby,’ then tried to cover it up, luckily she was too dumb﻿ to catch it,” disgruntled tail wagger added on YouTube.

What do you think? Super-cute or super-fake? It’s already been a landmark day for too-good-to-be-true viral videos. Remember that twerking fail with the candles?

UPDATE: The man has been identified as an actor, and the video is likely fake. Jimmy Kimmel, is this your doing?