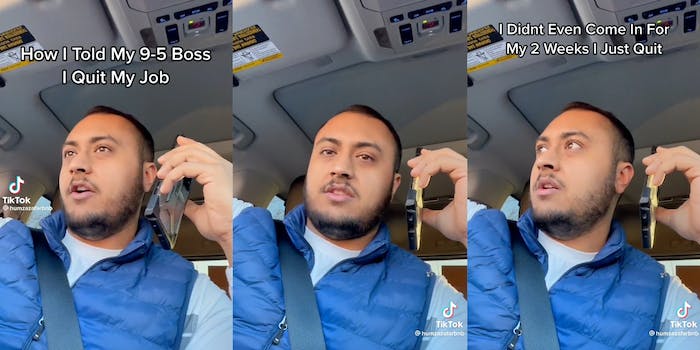 ‘Can I ask why?’: Man calls his boss and quits his 9 to 5 job in viral TikTok

'No good luck or congratulations?'

A TikToker’s video of him allegedly quitting his job to start his own business has gone viral. User Humza (@humzazafarbnb) posted the video to TikTok yesterday—and viewers don’t love his boss’ reaction.

Since then, the video has already accrued over 422,000 views.

“I just wanted to give you a call and… give you my two weeks today,” Humza says in the video.

“OK,” the person on the other end responds, later adding, “Can I ask why?”

“Oh yeah, I’m just going to basically work on my startup company that I started full-time now, so I think it’s the time now for me to just… take the chance and go for it,” Humza responds. The person on the other end simply answers with another “OK.”

In the text overlaying the video, Humza dubbed his quitting day “The Day I Took Off The Shackles and Escaped Corporate Slavery,” also specifically noting that he did not come in for his two weeks, just making a phone call.

In comments, TikTokers came out to support Humza on his decision.

“Congratulations bro, not many can take this step,” wrote one user.

“That’s awesome. proud of you bro. you got this,” added another. “Here’s to the next chapter of your life.”

Commenters also claimed that his boss’ apparent lack of care or concern was a sign that they didn’t appreciate Humza’s work.

“No good luck or congratulations?” asked one user of the boss.

“Employees are just a number,” stated another. “Something to learn from that phone call.”

“You don’t want to work for someone who doesn’t even have the heart to wish you luck and success,” shared a third.

As for Humza, his new business appears to be setting up and renting out Airbnb locations, as indicated by the hashtags on this video and other videos on his channel.

If Humza’s comments under the first video are to be believed, he earns a net profit of between $1,000 and $1,400 per month per rental property, though some in the comments have questioned his math. He also sells a course on how to run Airbnb properties.

No matter how much he is now earning, Humza seems more than happy to be done with his 9 to 5.

As he wrote in response to another comment, his quitting day was the “best day of my life.”