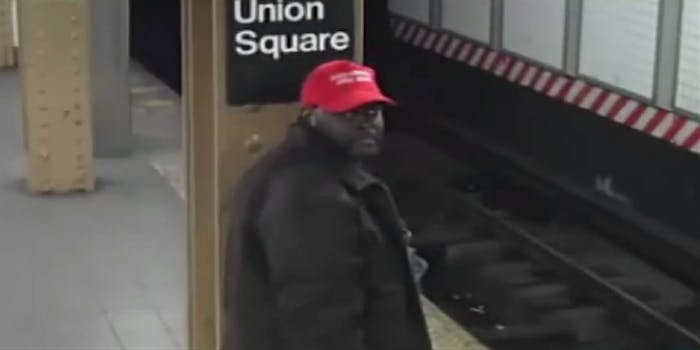 A man wearing a “Make America Great Again” hat and shirt allegedly pushed a Latino man onto subway tracks in one of Manhattan’s busiest subway stops on Friday night, after reportedly making derogatory remarks to the victim.

The incident began after the victim and the suspect got into a verbal altercation on an uptown 4 train heading to the 14th Street–Union Square station, the New York Police Department said, according to NBC New York. As the argument continued, the suspect, who is Black, allegedly made racist comments about the Latino man’s ethnicity, claiming that “Mexicans” are taking away jobs from American citizens and bringing in drugs.

As the victim left the 4 train, he was followed by the suspect, who allegedly punched him on the head several times at the platform before pushing him onto the subway tracks below, ABC7 reports. The suspect later fled the scene as a friend and a bystander helped the victim back onto the subway platform.

Afterward, the victim was brought to a nearby hospital, where he was reportedly treated for cuts on his head from falling on the tracks. The suspect is still at large and wanted by the police.

The MAGA hat isn’t a popular look in New York City. A Fordham University coffee shop previously kicked out Republican club members wearing the hat, and an 18-year-old Danish tourist had his MAGA hat taken away from him at knifepoint by two men at Union Square. When in doubt, Trump voters should keep their MAGA paraphernalia at home.