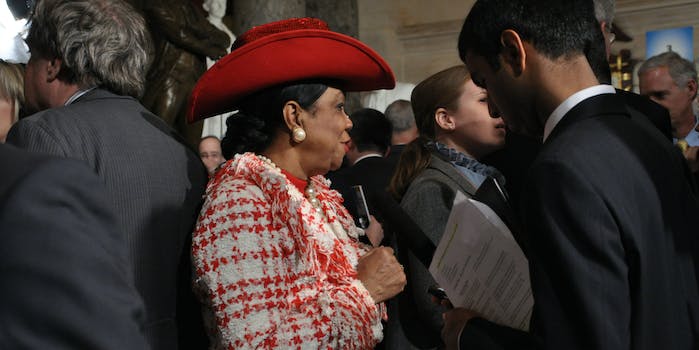 Keevers told the Chicago Tribune’s Chicago Inc. that he was involved in a “fast and furious” fight on Facebook, centered on whether or not Wilson was “using the death of an American soldier” for political gain; last week, the representative had come forward with details of the president’s mishandled condolence call to a fallen soldier’s widow. Things quickly went out of control, Keevers claims, and “some disgusting language” led him to delete the thread. All of which led to Keevers going viral, with a screenshot from a Facebook post showing him threatening to lynch Wilson.

“Need ten good men to help carry out a lynching,” the post says, showing an image of Wilson. “Must have own horse and saddle. Rope will be provided.”

This is Tom Keevers. His Facebook page is still up. This is the man who said that @RepWilson should be lynched. He lives in Des Plaines IL. pic.twitter.com/h0Sq2NvR9Y

No, Tom Keevers doesn't 'need more fame.' He needs to be arrested for posting a death threat to a sitting member of Congress. @FBI @NAACP

According to the Tribune, Keevers can’t remember whether or not he wrote a threat to lynch Wilson. Instead, he thinks a “meme-maker” turned him into a meme. He also downplayed the post as “a joke, as I read it,” pointing out that people “get in arguments on Facebook all the time.”

“I did not use those words,” he told the Tribune. “There is no investigation.”

But Des Plaines police are currently investigating Keevers, and it appears Washington, D.C., is interested in his alleged Facebook post as well. The Tribune reached out to the U.S. Capitol Police earlier this week, and the department responded by saying the force doesn’t “comment on open investigations.” After all, it’s a federal crime to threaten violence against a Congressional representative. Although Keevers claims police told him there is “nothing for me to worry about.”

“People threaten Donald Trump all the time and nothing happens,” Keevers said to the Tribune. “I don’t think a lot about what I write on Facebook.”

Last week, Rep. Wilson revealed that the president called the widow of Sgt. La David T. Johnson to offer condolences but forgot her husband’s name and then said that he “knew what he signed up for.” Trump later attacked the widow, Myeshia Johnson, over Twitter, claiming he “spoke his name from beginning, without hesitation!”

Correction: A previous version identified Wilson as from Illinois. We regret the error.