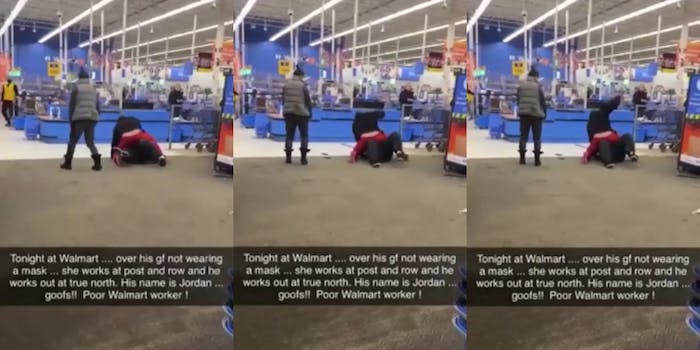 Police later arrested the attacker for mischief and assault.

A viral Reddit video shows a Walmart customer in British Columbia allegedly assaulting an employee who reportedly asked him to wear a mask in the store.

The altercation took place at a Walmart in Dawson Creek, British Columbia, the westernmost province of Canada. Police were called to the scene after a 30-year-old man attacked an employee who asked him to mask up in accordance with B.C.’s mask mandate, CBC News reports.

The video was uploaded to Facebook and later removed from public viewing, but not before migrating to the r/publicfreakout subreddit, where it has earned more than 1,500 upvotes and 300 comments.

The video shows the assailant, dressed in a black hoodie and red sweatpants, straddling the Walmart employee and punching him repeatedly. He then stands up and kicks the employee in the sides.

According to the video’s caption, the assault actually stemmed from the employee asking the aggressor’s girlfriend to wear a mask. The video also shows a woman—ostensibly the attacker’s girlfriend—standing near them and at one point telling the battered employee, “Fuck you.”

Police identified the aggressor from the store’s surveillance footage and later arrested him at his home for assault and mischief, CBC News reports. Sgt. Damon Werrell said the employee only sustained “minor injuries not requiring immediate medical attention.”

Walmart did not immediately respond to the Daily Dot’s request for comment, but in a statement to CBC News, a company spokesperson called the assault “completely unacceptable and deeply troubling,” adding that “our associates are doing everything they can to support our communities during this pandemic.”

This is not the only report of Canadians wilding out over public health mandates this week.

On Wednesday, police shut down Toronto’s Adamson Barbecue and delivered nine charges to owner Adam Skelly, including violating indoor dining rules, holding an illegal gathering, and operating a business without a license.