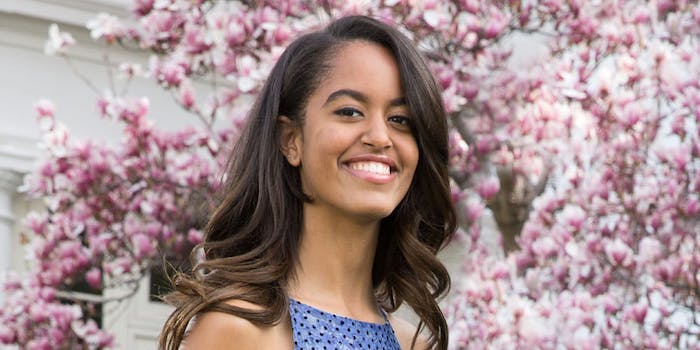 TMZ obtained a video of Malia Obama not wanting her photo taken.

Fame isn’t always a good thing, especially when your father is one of the most popular ex-presidents ever. And even though her dad retired from his day job, fans aren’t letting up on Malia Obama now that she’s starting college at Harvard.

Malia was entering a salad shop at Harvard Square on Saturday when a woman came up to her, asking to take a photo for her granddaughter. Malia politely rejected the request, but the woman was persistent. She waited for Malia to leave to take a photo. And once she left the restaurant and saw the woman waiting, Malia snapped.

“Are you gonna take it in my face like an animal in a cage,” Malia said in a video obtained by TMZ. According to the Independent, Malia Obama eventually gave in and let the woman take her picture.

But it’s pretty invasive to obsess over Malia Obama’s life. When people treat Malia like a reality star, focusing in on every little detail of her life, it robs her of her chance to have a life like any other college student. Many complain that both the photographer’s picture and TMZ’s reporting are feeding into that problem.

Let her discover who she is without her life's moments in the media.

"Watch the video of someone making it clear they do not want to be recorded at all."

In a bipartisan twist, Trump fans and Obama critics even came to Malia’s defense, arguing that she has a right to privacy while going to college.

I'm not a Democratic, but I don't want to see any presidents children harassed! Leave them alone

I don't like 44. But come on leave the girl alone… Bulling needs to stop..Wheres her secret service?

There is ZERO reasons to harass them. They did not sign up for it or get voted in. I must add I am a Trump supporter what's wrong is wrong

This isn’t the first time Malia Obama has faced scrutiny from the media. Malia was previously criticized for smoking a “marijuana cigarette,” better known as “pot” by most normal Americans. Harvard students also lost their collective cool when they saw Malia’s famous dad, Barack, helping Malia move in. No matter where Malia Obama goes, the world isn’t ready to treat her like a normal person.