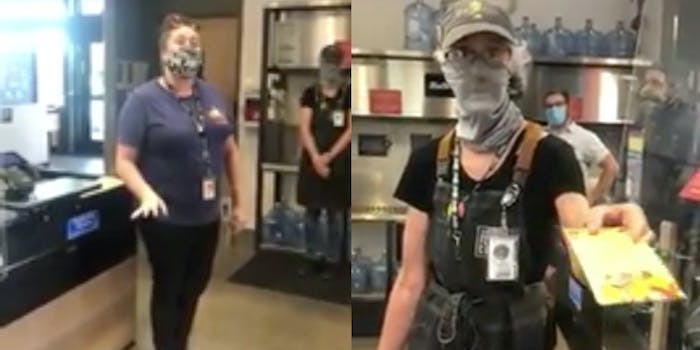 Employees refused to check him out since he wasn't wearing a mask.

A “Male Karen” called an alleged Whole Foods a “communist organization” after employees said they would not ring up his items because he wasn’t wearing a face mask.

The man recorded his own three-minute public freakout. The video was posted to the r/PublicFreakout subreddit on Tuesday by user Capt_Baggins.

The video title says it was filmed in a Whole Foods, but the Daily Dot could not confirm that claim due to the quality of the video and lack of identifiable objects.

Throughout the video, the man says he just needs to feed himself and that the employees need to ring him up.

“Call the police if you need to,” he says in the video. “I just want the world to see a communist organization that is discriminating against people.”

Other users on Reddit—commenting with the understanding that the video was taken inside of a Whole Foods, which is owned by billionaire Amazon CEO Jeff Bezos—pointed to the irony of the phrase.

“As usual, the idiot calling people communists doesn’t even know what communism is,” user randoman99 commented. “Somebody want to tell him the place is owned by one of the biggest, most aggressively capitalist companies in the world?”

The man also never discloses what health condition he has but says he would pass out if he wore a mask.

According to experts who spoke with the Kansas City Star, there are a very limited number of reasons a person would not be able to wear a mask. In June, some anti-maskers even created fake medical cards that cited the Americans with Disabilities act as a reason to be exempt from wearing a mask.

Employees in the video ask the man not to record, as they’re on private property, and tell him they offer curbside pickup and other options.

The man also says he shopped at the store two weeks ago.

“Is the virus more dangerous now?” he asks in the video. “Now all of a sudden five months in I have to wear a mask in your store to get my food.”

Across the United States, the average number of cases has decreased by 11% from two weeks earlier, still bringing the total number of cases per day to almost 60,000 according to the New York Times.

After an employee informs the man that the store policy has changed, he continues to say they don’t care about him and that they need to ring him up.

The video ends with the man walking toward the exit doors, presumably without his groceries.

Update 5:48pm CT, Aug. 10: In a Facebook message to the Daily Dot, David Rainer identified himself as the man in the video and said it was filmed at Sacramento Natural Food Co-op in California.

Rainer said people should not shame or blame others for not wearing a face covering and that instead, they can spend $30 on a “proper mask that will protect you from a virus regardless of who is or is not wearing a mask.”

Rainer posted a photo of a mask on his Facebook on Sunday.

A new study by Duke researchers found that typical surgical N95 masks filter out 95% of air particles and are the most effective kind of mask. N95s are available on Amazon, and some cost as little as 34 cents a mask when bought in bulk.

Jennifer Cliff, the marketing director at the co-op who was present during the filmed interaction, said Rainer wasn’t wearing a face covering when he entered the building.

Rainer did not respond when the Daily Dot asked if he was wearing the mask in the photo or any kind of face covering.

Cliff said an employee alerted Rainer to the policy whenever he entered but did not want to physically block him due to safety concerns. Rainer also said the co-op provides free masks to anyone who forgets to bring one or otherwise doesn’t have access to one.

“None of us loved the situation and we would rather not be in this situation. He was antagonistic,” Cliff said, adding that the co-op isn’t the only retailer in the area with a mask policy. “Why he chose to call out us for having this policy, I don’t know.”