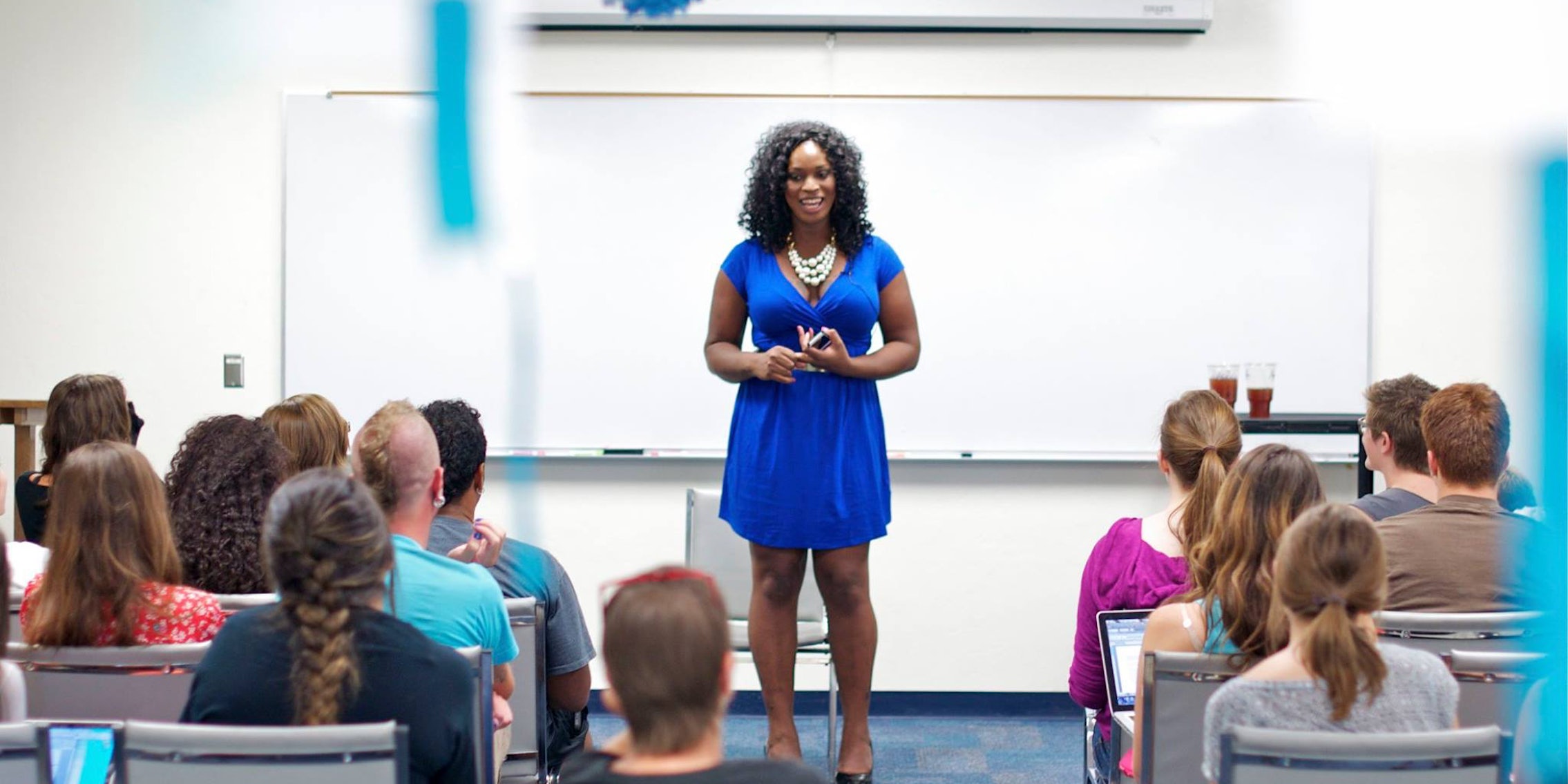 The LGBT community is demanding that Lyft take disciplinary action.

On Friday night, Monica Jones did the same thing many other young people were doing across the country: She took a Lyft to her favorite watering hole to start off the weekend by drinking cocktails with her friends.

But after a short time at the Cruisin’ 7th bar in Jones’s native Phoenix, Arizona, she got a concerned Facebook message from someone she knew. Attached to the message was a screenshot of a taunting post about Jones that revealed her current location. The post was made in a Facebook group called “Phoenix Lyft Rideshare Lounge (and Phoenix Uber Too),” and as Jones was shocked to discover, it was written by the driver who had just dropped her off. 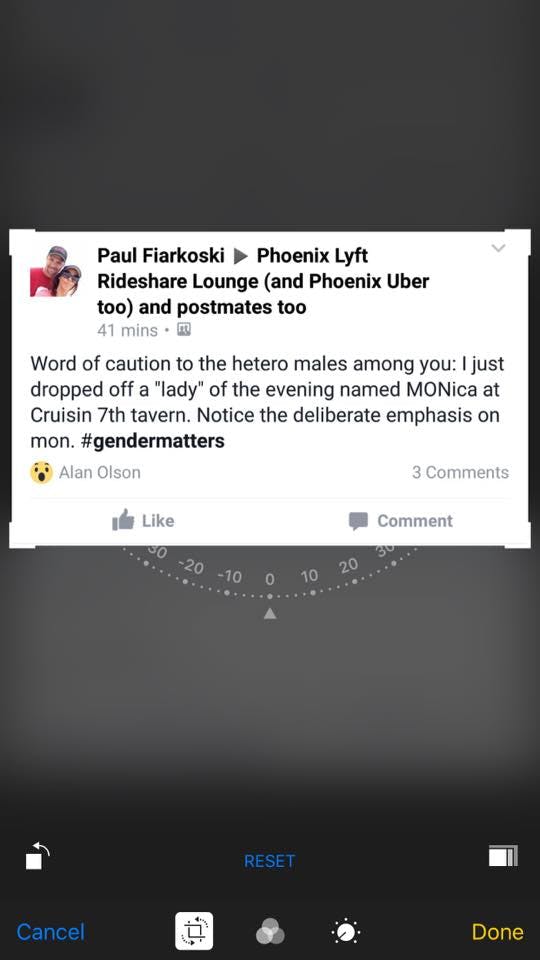 “Being a trans activist in Arizona, I’m a little well known,” Jones told the Daily Dot in an interview Sunday morning. “If you just say ‘Monica’ and the bar Cruisin’ 7, people know what that is. It’s a local trans hangout. When he posted that, I literally had to get up and walk out.”

Jones is a high-profile figure not just locally, but in the national LGBT community. In May 2013, Jones was arrested while walking down the street in an incident that brought the phrase (and hashtag)  #WalkingWhileTrans to prominence. Jones said that she had been profiled by police as a sex worker just because she was a black transgender woman as well as an outspoken local activist. The ACLU took her case, trans icons like Laverne Cox and Janet Mock issued public statements of support, and a movement around the profiling of trans women of color was born—with “We Stand with Monica Jones” as its rallying cry.

Jones has since given testimony about the experience to a United Nations gathering in Geneva, and an Arizona court overturned her aforementioned conviction for “manifesting prostitution” in a January 2015 victory. A few hundred headlines later, it’s suffice to say Jones is well-known enough to be recognized through Fiarkoski’s post. And given her experience, it’s ironic that Jones ended up walking home from the bar that night rather than risking another Lyft ride.

“That really stuck out—the fact that I had to walk home because of this incident,” Jones told the Daily Dot. “I could have been profiled and arrested, I could have been killed. So many trans people are killed on the streets everyday. My life felt like it was in jeopardy either way: when he posted my location, and when I walked home.”

The Daily Dot reached out to Fiarkoski for comment on Facebook but did not receive a response. A quick glance at Fiarkoski’s profile revealed that the Jones incident was not the first time the driver had publicly disparaged a well-known transgender figure. 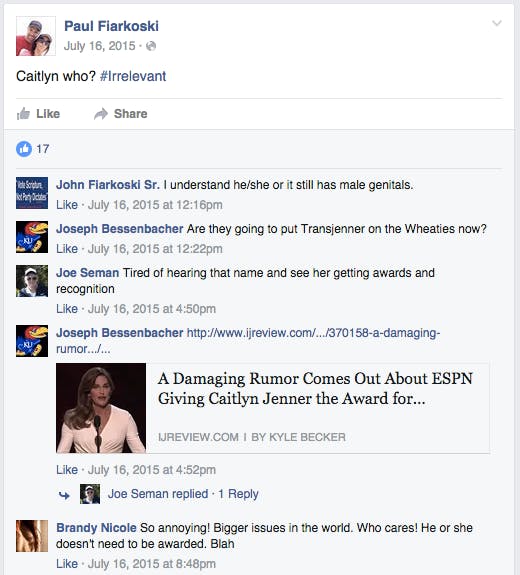 Jones had not received a response from Fiarkoski by Sunday. She expressed frustration with Lyft’s response to her complaint as well, sharing a screenshot of the company’s message on Twitter and Facebook. 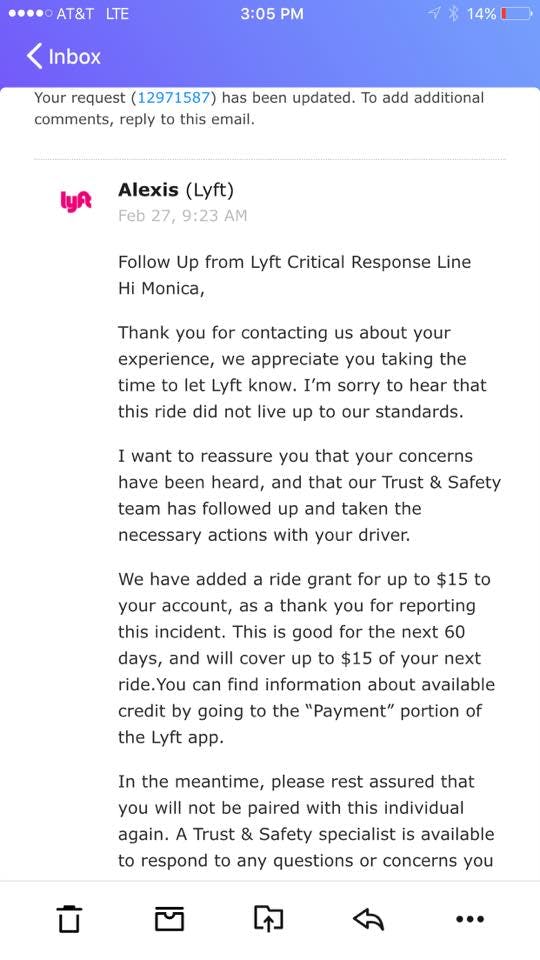 On Twitter, supporters demanded that Lyft take action against the driver—and some called for a settlement to be offered to Jones, under threat of a boycott.

3. How did she get home after realizing her name & location was published by @lyft driver? She walked. #boycottLyft https://t.co/xefJaE048l

2. THE cost of endangering the life of a Black Woman using #rideshare @lyft in America is worth $15 redeem in 60days https://t.co/pSzgEko2mp

The Daily Dot reached out to Lyft and was provided with the following official statement.

Lyft does not tolerate any form of discrimination and is committed to maintaining an inclusive and welcoming community. The driver’s behavior is unacceptable and a clear violation of our anti-discrimination policy. His access to Lyft been permanently removed.

The company’s spokesperson also directed Daily Dot to its anti-discrimination policy, which states that discrimination against passengers or drivers on the basis of gender identity (and a variety of other classifications) is not allowed and “can result in deactivation from the platform.”