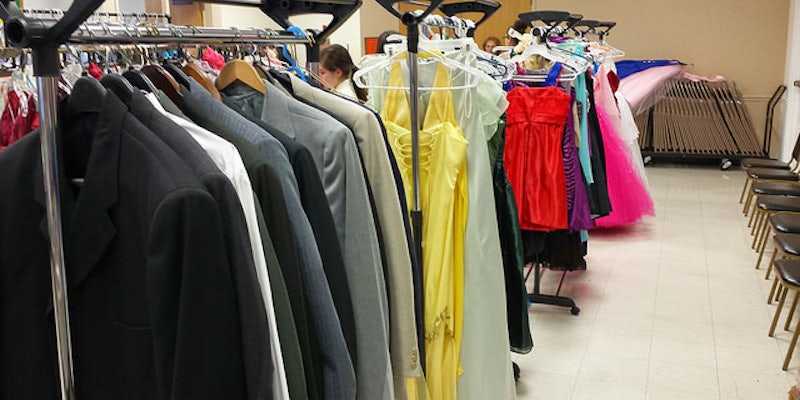 'People should be able to celebrate at their prom based on exactly how they identify.'

When they heard the news, queer fashion designers Leon Wu and NiK Kacy jumped at the opportunity to help her. They connected with Love through the reporter who broke the story to say they “were fully supportive of her,” Wu told the Daily Dot. They even offered to throw Love her own prom party.

Eventually, though, Love’s story made national headlines, and the school districted relented. Love was permitted to attend prom dressed however she wished, the News Star reported. As a symbol of support, Wu and Kacy dressed Love “from head-to-toe” with items from their respective gender-neutral suiting and footwear collections.

Now, Wu and Kacy are extending their offer to any student who wants to attend prom in an outfit tailored to fit their gender expression. In honor of last year’s recipient, the pair have named their project the Love Fellowship.

“People should feel confident and be able to celebrate at their prom based on exactly how they identify and be able to carry that on past high school,” Wu explained. “[Clothing] is a big marker for that happening, for them to express themselves at prom.”

Despite massive leaps in mainstream queer visibility and progress in national legislation to protect the rights of LGBT Americans, high school students still encounter discrimination and bullying based on their sexual attraction and gender expression. According to the Human Rights Campaign, LGBT youth are twice as likely as their straight, cisgender peers to report being assaulted at school. The effects of this violence are especially damaging to transgender teens: The Youth Suicide Prevention Program reports that more than 50 percent of transgender youth will have attempted suicide at least once before their 20th birthday.

This is a reality that Wu, a transgender man, and Kacy, who identifies as agender, know well. Their decision to support Love and others like her stem from their own experiences as teens when they struggled to reconcile their gender identities.

“I never went to my prom, and that was because I felt very uninvited,” Kacy told the Daily Dot. “I chose not to go, because I didn’t want to go through the experience of putting on a prom dress, because it just wasn’t who I was… I was trying to fit myself into the traditional mold of the gender binary.”

The Love Fellowship is open to any high school student planning to attend prom this year. To enter, students must create a short video explaining why unique gender expression is important to them and what their dream prom outfit would look like. The videos can be uploaded to YouTube, Vimeo, or any other video sharing site and then shared with Wu and Kacy. Submissions are due next Monday, Feb. 22 (extended from the original Feb. 15 deadline), and the winner will be notified by the end of March.

Interested students shouldn’t feel constrained by the details. “Whatever is an expression of you and your creativity, whatever gets the message across, is fine,” Wu told the Daily Dot. “Just have fun with it.”

Added Kacy, “For me, it’s about being genuine. Being genuinely and authentically yourself, and being serious, because [gender expression] is a serious issue.”

Gender identity is personal and can be expressed in a variety of ways, but embracing individual style can be liberating. This has been the case for Wu and Kacy, whose own gender identity journeys led them to pursue careers in fashion.

“When I was really young, I knew that I preferred to dress like my dad rather than my mother,” said Wu. “So I would actually sneak into my dad’s closet and try on his clothes when nobody was watching.” As he grew up, Wu grew into his own masculine style, which carries over into his professional brand. “There’s a certain way I wear my clothes and we incorporated all of that into Sharpe Suiting,” he continued.

Though Kacy is gender fluid and embraces both the masculine and the feminine, he describes his fashion sense as “masculine of center.” So when he began to design his own footwear, he created the shoes that he wished he could have worn when he was younger.

“As a child, I couldn’t find shoes that represented how I wanted to look and my style,” Kacy explained. “My feet were always one size shy of what the men’s shoes were. So for my first collection, I thought of all the shoes I ever wanted to wear and started drawing.”

It took time for Wu and Kacy to feel confident in their gender expressions, and the road to self-acceptance wasn’t always an easy one. With the Love Fellowship, they are doing their part to ensure that students who want to attend prom will be able to do so, regardless of how they want to dress. Said Wu, “The purpose of this contest really is so students won’t have to go through what NiK and I had to go through growing up.”