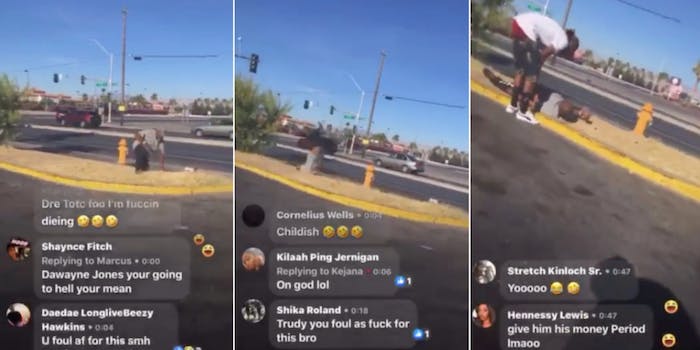 The streamer reportedly told onlookers not to call an ambulance for almost 10 minutes.

Police have arrested a streamer who recorded himself paying a man experiencing homelessness to do a backflip. The man who attempted the stunt died from his injuries.

Las Vegas police arrested 28-year-old Keonte Jones on Tuesday for felony willful disregard of a person’s safety, according to a statement from the Las Vegas Metropolitan Police Department. On June 20, Jones allegedly offered 55-year-old Larry Coner $6 to perform a backflip after Coner initially approached him to ask for money. Coner later died as a result of injuries sustained from the stunt.

Jones streamed the incident on Facebook Live. A person who goes by Rearranging Williams on Facebook and claims to be Coner’s sister uploaded the video to the Black Lives Matter Las Vegas page on July 3.

The disturbing footage shows Coner attempting to do several cartwheels in a parking lot before trying the backflip. He lands on his neck, and several onlookers scream in horror as Jones howls with laughter.

“He sleep!” Jones yells. “He done hit a backflip and went to sleep!”

As onlookers check on Coner, Jones implores them to “leave that N-word alone.” A woman at the scene accuses him of having “no f*cking remorse.”

Police say Jones “continued laughing and filming Coner for almost 10 minutes while telling onlookers not to call medical.” Coner was eventually transported to University Medical Center with a spinal injury. He died on June 30.

In the comments of her post, Williams also shared a link to a GoFundMe to help her “bury” Coner.