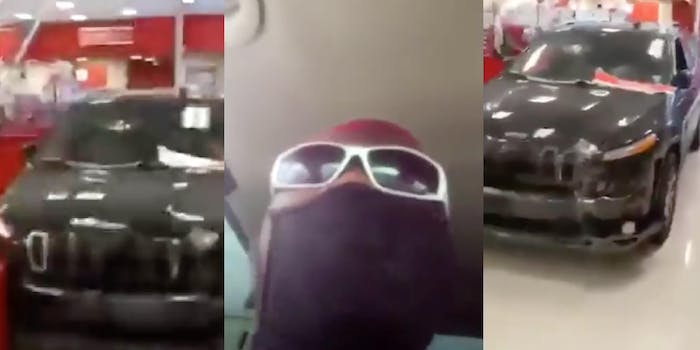 Man live-streams himself driving into Target

The man is said to have planted fake explosives inside the retail store as well.

A man in Louisiana live-streamed himself on Friday driving his vehicle inside of a Target store.

The man, identified by the Hammond Police Department as Walter Allbritton III, captured the moment as he drove through the front doors of the retailer.

Another man shopping as the incident took place was also able to film Allbritton as he ran into a cash register.

Allbritton is said to have dropped a fake explosive device after stepping out of his vehicle.

The concerned shopper who filmed the crash immediately began running through the store, warning customers to leave the building.

Allbritton continued streaming as he walked through the store before eventually walking out the back. That’s when the suspect approached a vehicle and threatened to carjack the driver, who sped away from the scene.

Allbritton was eventually taken into custody after law enforcement arrived on the scene. It’s unclear if this situation involved mental health concerns.

FBI and ATF agents also arrived to investigate the alleged explosives, according to WAFB9. As it turns out, the suspect visited other nearby stores, including a Dollar General Store and a Sanderson Farms. Four fake explosive devices were found at various locations.

Louisiana Governor John Bel Edwards announced that an investigation is ongoing and that no evidence thus far suggests Allbritton’s actions were related to protests going on across the country.

“That’s based on some very preliminary information I got just before I walked out, although, I don’t entirely rule that out,” Edwards said. “I think there may have been another cause for this. Obviously, not one that’s justified, but it could have been motivated by something totally different.”