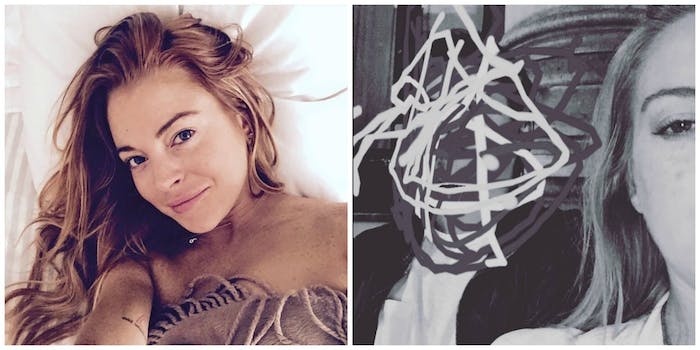 Police were also called to the couple's London apartment on Saturday night.

On July 23, Lindsay Lohan posted a series of photos and a video on her Instagram account accusing her fiancé, Russian businessman Egor Tarabasov, of cheating on her.

Many of the posts have since been deleted, including one of Tarabasov at a party with the caption, “Wow thanks #fiance with Russian hooker @dasha_pa5h.”

Us Weekly reports that @dasha_pa5h refers to Dasha Pashevkina, whose Instagram account has also been deleted. Another post was a video that showed Tarabasov partying, captioned, “Home? First time in my life-bare with he/ he cheated on me with hooker #meangirls #meanboysu b.”

The remaining Instagram post is a selfie of Lohan and Tarabasov, with his face scribbled out. “He wore black and I wore white…. 🙉🙈🙊⚓️ I guess #art is whatever you make of it,” Lohan wrote.

In the middle of this, Lohan also tweeted that she was pregnant, linking to photos of her in the upcoming movie Labor Pains.

It was later revealed that police had also busted down the door of Lohan’s London apartment on Saturday night, after neighbors heard the actress screaming for help. The Sun obtained footage from a neighbor of the incident.

She was also heard shouting to Egor – who was also near the balcony: “I’m done. I don’t love you anymore. You tried to kill me. You’re a f*****g psycho” before adding ‘’We are finished.’’

No arrests were made and Lohan was spotted leaving the apartment less than 24 hours later to go out with a friend.

This isn’t the first time the couple have had a public argument. Earlier in July, the couple had a huge fight that prompted Lohan to throw Tarabasov’s phone into the ocean and for him to dump water on her head.