If you listen closely, you can hear a virtual symphony of teenage girls scrambling to pose.

On a recent Tuesday night, the signal went out. There was a 10-minute warning, and if you listened closely, you could hear a virtual symphony of teenage girls scrambling to pose.

Thirty minutes later, the Twitter account @GirlTimeUSA was a scrollable hall of teenage selfies, filled with girls expertly posing in bedrooms, backyards, bathrooms, and classrooms across the country. One girl took a selfie before brain surgery.

Bay Area rapper Lil B (real name Brandon McCartney) is GirlTime’s curator of selfies. He selects the theme and announces the sessions, much like he’s done on his own Twitter page, where he has more than 750,000 followers. 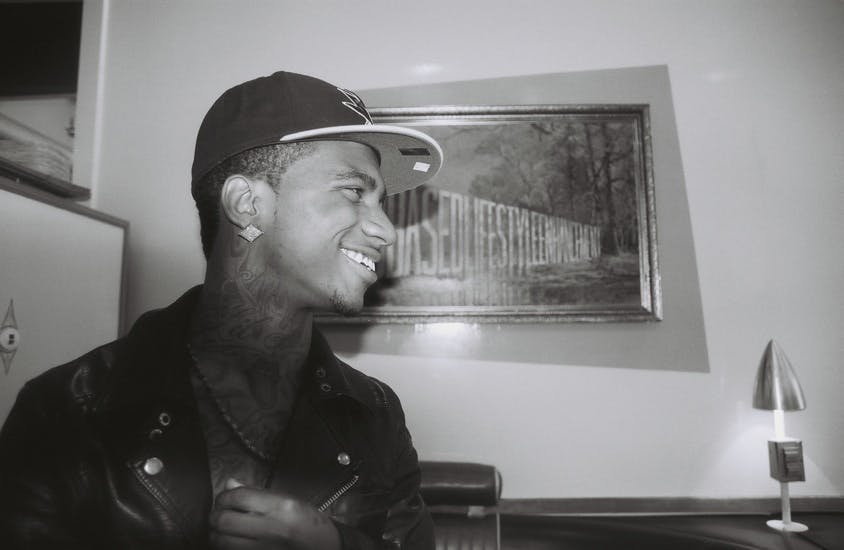 Lil B. Photo via Generation Bass/Flickr

Both McCartney and his fans refer to him as “Based God,” and he’s created a culture around staying “based,” or positive. He’s fond of releasing mixtapes with 676 songs; penned a self-help book, called Takin’ Over by Imposing the Positive!; and is perhaps best known for his song “I’m Gay.” He also has songs called “Violate That Bitch” and “Suck My Dick Hoe,” blurring the line between hackneyed rap boast and self-aware satire.

But self-awareness is the crux of this social experiment. GirlTime is, essentially, a gallery for female selfie expression. “FLAUNT” is the all-caps mantra repeated in tweets, which are punctuated with advice on self-image, diet and exercise, and what to do about bullying. They shouted out to Wendy Davis the night of the filibuster.

There are also rules, put in place by Lil B when the official account first appeared in June.

RULES OF GIRLTIME #3 – THIS IS NOT A PLACE TO SEND NUDE PHOTOS OR ANYTHING TO SEXUALLY EXPLICIT, GIRLTIME HAS ALOT OF HONOR AND RESPECT

RULES OF GIRLTIME #10 – THE THEME “FACEANDFEET” IS LIL B’S #FAVORITE THEME, THIS IS ONE THEME YOU CAN ALWAYS DO AND LIL B WILL ATLEAST LOOK

Other photo themes include “full body,” “no socks,” and “mirror” pics. There’s a degree of direction to the impromptu shoots, which highlights the performance aspect of GirlTime. There might also be a degree of fetish in Lil B’s preference for “no socks” or “face and feet.”

But the girls are ultimately in charge of their image, and construct their own narrative, which is mirrored on their Tumblrs, Snapchats, and Facebook pages. To be able to “perform” for your favorite musician in this context is a new cultural shift. Selfies aren’t so much about empowerment or sexuality as they are a way of being visible, of saying, “I exist.” Still, they’ve lead to gendered shaming and hand-wringing.

In an interview that originally appeared on MTV Desi, Lil B says he started GirlTime as a way to appreciate “beautiful” women, but it’s turned into a support system:

A lot of girls send me messages and this way they can find other girls that share their feelings on whatever they’re going through and build a support system. It’s really about building confidence too. The Internet has so many cool people, so many weird people, sometimes losers who say mean things. This is about trying to make people happy with themselves and each other and that’s all.

He also outlines the criteria for being a GirlTime girl:

I look to see if they are supportive to their friends and have a really positive attitude and don’t attack anyone on how they look or what they believe in. They’re not bashful and they’re not mean. It’s a special type of thing. They’re leaders.

This relationship makes sense. The 24-year-old Lil B is a product of the Internet, and so are many of his fans. They’re teens or in their early 20s, and social media is hardwired.

The cult of the selfie and Lil B’s cult of personality dovetail on GirlTime. Selfies are part of the teen cycle of being, a way of mirroring the self-awareness of their Based God. Can you think of another musician whose fanbase has meta-documented itself this way, and turned their fandom inward?

The photos are their own language, too, hashtagged with #preGT (pre-GirlTime, when girls are preparing for the shoot), #topGT (top GirlTime, reserved for the day’s favorites), and other affirmations like #ilybg (I love you, Based God) and #tybg (Thank you, Based God). Lil B retweets his favorites, and the process begins again.

Still, these women are performing for a man, playing by his rules. As much as positivity and acceptance are a part of GirlTime’s foundation, the metrics of Twitter—retweets, favorites—do add a level of competitiveness. And negativity does creep in, especially when a girl raises an issue about GirlTime’s rules.

Jodie Smith, a 17-year-old fan from the U.K., has been a Lil B fan since 2010, and has participated in GirlTime for a year. But more recently, she says, the page has drawn in more non-fans. 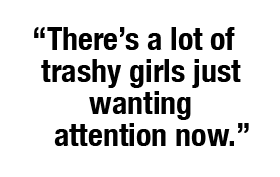 “I think GirlTime is a positive thing, but not as much as it used to be,” she told the Daily Dot. “Lil B teaches everyone to love themselves, and I do think it’s positive for us to express ourselves, [since] the media portrays ‘bigger’ girls as being less attractive. Lil B retweets almost everyone’s photo to try and make them feel better about themselves.

“But yeah,” she added, “it’s not as much of a ‘positive’ thing anymore. There’s a lot of trashy girls just wanting attention now.”

For the most part, any negativity or bullying that happens on GirlTime is quickly addressed, and there are periodic tweets that remind anyone involved that this is a positive space. But Smith’s comment about the media’s portrayal of women is valid. When heavily altered images of women project what’s acceptable for bodies to look like, an unaltered photo of a woman might be deemed unnatural or problematic. GirlTime may be a way to get attention, but it also features real women’s bodies.

I fumbled with my phone, trying to find the right lighting, angle, and face; I’ve absorbed the selfie pose via ambient awareness over the years, but I’m not of the generation that knows the default.

By the time I’d taken a halfway decent photo that mostly filtered out the slow march of 34 years, the girls of GirlTime had already submitted perfectly posed and styled selfies. The majority of the photos weren’t sexualized pin-ups, but simple statements of being. This generation of girls knows exactly what to do when the signal goes out.