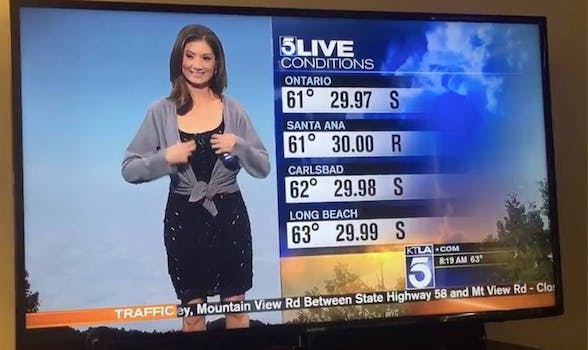 Liberté Chan's dress was too hot for some prudish viewers.

KTLA weather reporter and meteorologist Liberté Chan was in the middle of her Saturday morning forecast when a cardigan was suddenly thrust at her from offscreen. “You want me to put this on?” she asked, “Why? ‘Cause it’s cold?”

“We were getting a lot of emails.”

Apparently, the dress Chan was wearing—a black, beaded number with tassels—was too much for some of the station’s more conservative viewers, and someone in station management decided to appease them by covering it up.

The video from @KTLA. They handed her a sweater LIVE ON THE AIR because they were "getting a lot of emails." #KTLA pic.twitter.com/ADPb0poVDS

Most of the responses online have been supportive of Chan, who was clearly having fun wearing the dress, and critical of the station for embarrassing her on air.

Not only is it somewhat ridiculous to sexualize and attempt to shame a professional woman for showing her bare arms in the year 2016, it’s also ignorant of the unique wardrobe challenges weather reporters face.

Meteorologists on local TV have to provide their own wardrobes for the most part. There’s only a narrow section of the dress market that’s affordable, stylish, and dodges the kinds of old-fashioned complaints Chan received this weekend. This dearth in “appropriate” outfits has led to dozens of American weather reporters all wearing the same dress in different colors.

Oh, and about colors: As a weather reporter, you can’t wear certain shades of green, lest your dress “key out” and vanish against the green screen background during your map segments.

Chan learned that lesson the hard way earlier this year.

In fact, she said on Twitter that that’s why she changed clothes between Saturday’s 6 a.m. report and the “controversial” one later that morning.

The dress keyed out https://t.co/RuLKv3wRTT

Chan doesn’t owe anyone an apology here. Well, except maybe librarians—she complained that she looked like one after putting on the dowdy cardigan.