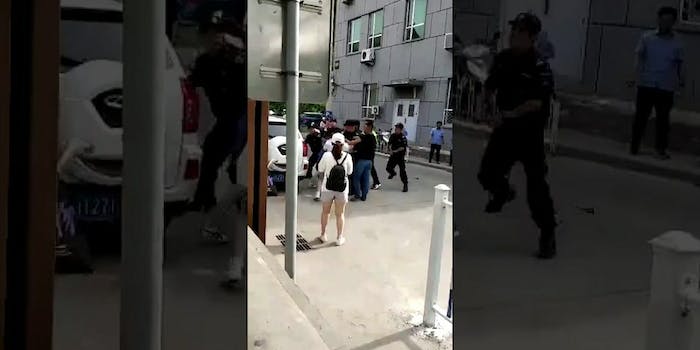 The women were supporting International Day Against Homophobia.

The two women were trying to enter the 798 art district when security guards refused to give them entry, witnesses say, according to the Guardian. Guards and police officers began beating one woman to the ground, the video shows; after the second woman attempted to hit a guard, she was subsequently beaten and punched to the ground as well.

The security guards were reportedly refusing to let any person pass into the district if they were wearing a rainbow badge, after security caught an LGBTQ activist handing out badges for the International Day Against Homophobia. That activist, who goes by the name “Piaoquanjun” online, told China’s Global Times that both women have since been hospitalized after being beaten.

The video and its hashtag, called “798 beating” in Chinese social media, has since been blocked within the country. Chinese activist Lu Pin, who runs the website Feminist Voices, stresses that China is further suppressing public speech in China, particularly for marginalized people.

“The public space for diverse expressions is collapsing,” Pin said, the Guardian reports. “People are realizing that they must stand up for their rights, but the situation is so difficult now.”

While being gay isn’t outright illegal in China, LGBTQ content is still regularly blocked on state media, and homophobia remains pervasive across the country. Eurovision recently banned China from airing the annual song contest after the Chinese government censored an LGBTQ love story from the show.