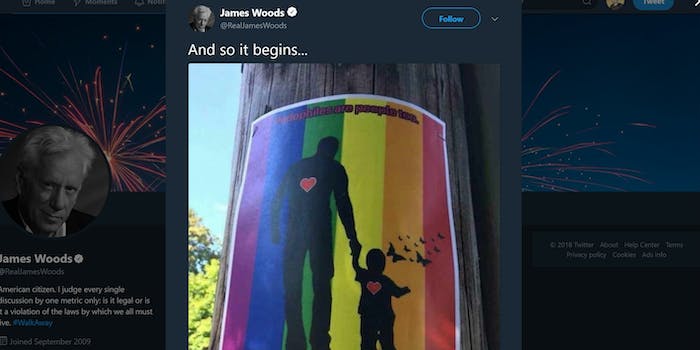 Trolls are spreading falsehoods about the LGBT community supporting pedophilia

James Woods momentarily emerged from irrelevance earlier this week to share a picture of a poster adorned in LGBT pride colors, with text reading “Pedophiles are people too. Because love is love.” What the actor either chose to ignore or was just generally ignorant of was that this poster was likely yet another in a long line of attempts to falsely associate the LGBT community with pedophilia.

And so it begins… pic.twitter.com/ku6FQpBbAO

This example and many others have resurfaced as a result of far-right internet trolls and activists hoping to discredit the LGBT community.

“And so it begins,” wrote Woods—who is also known for his intensely conservative views.

As of August 4, the tweet had received 14,000 retweets and 22,000 favorites, with many Twitter users sharing their apparent disgust at what they falsely assumed was a truth about the LGBT community supporting pedophilia.

The sign in question was confirmed as real by Portland, Oregon’s local KATU news station, which discovered the signs hung up around the Willamette Primary School.

“It’s just very clear that this message was meant to stigmatize and stereotype LGBTQ people,” Cameron Whitten, the Q Center executive director, said in an interview with KATU. “At a time when we are facing homophobia, transphobia, it is not helpful for these kinds of harmful messages to be disseminated out.”

This is far from the first time something like this has been attempted. After alt-right personality Mike Cernovich gave a talk at Columbia University, a student protest emerged. A reporter covering the protest happened to spot a sign supposedly protesting Cernovich that also read, “No pedo bashing.” Reporter Jake Offenhartz noted that the banner was planted and witnessed protest organizers removed the individuals responsible for it.

That didn’t stop Cernovich, who retweeted the image without any of the context Offenhartz had provided.

These misinformation campaigns have been propagated on far-right forums like 8chan, QAnon forums, and conspiracy websites like Infowars, where many of these campaigns initially organize.

“Pedophilia makes people angry, and anger is an emotion that drives action,” Joseph Uscinski, a political science professor at the University of Miami who studies conspiracy theories, told BuzzFeed News. “That action could include either sharing the story on social media or going out and chasing the pedophiles with weapons. Or something in between.”

It stands in stark contrast to the election debacle in Alabama last year, where Republican candidate Roy Moore was accused of courting underage girls as romantic partners, yet still received a large (but not winning) portion of the vote.