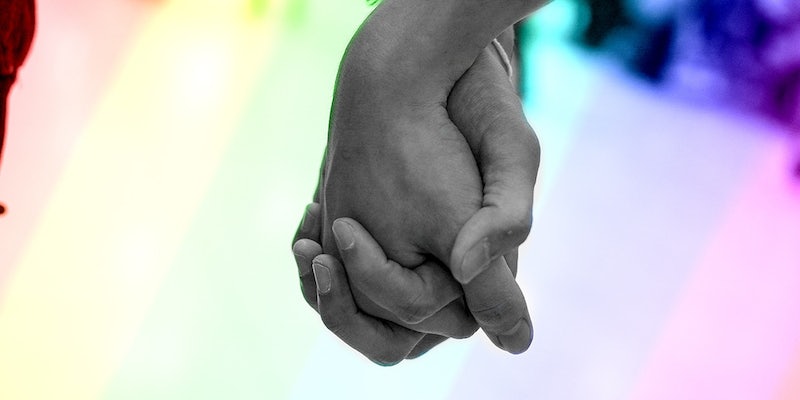 From LGBT people to straight allies: Here’s how to talk about Orlando

Straight friends and family: You are needed right now.

In the days after the Orlando massacre of 49 people at the gay club Pulse—most of whom were LGBT and Puerto Rican—the LGBT and Latino communities are hurting worldwide.

Lesbian, bisexual, queer, gay, and transgender people are in turmoil—and many of their straight allies are unsure of how to help. At the same time, many queer folks are dismayed at what they see as a lack of recognition and empathy from those outside the community. Many of us have watched as select media reports and statements failed to even mention that the Orlando victims were gay people killed in a gay sanctuary, and watched as politicians turned the conversations away from the shooting being a hate crime—all while being reminded of our own fears and personal histories of gay-bashing and homophobia.

The Daily Dot reached out to a number of LGBT people to ask: If you could tell your straight friends and family anything right now, what would it be?

These are their answers, along with quotes from some of the personal essays that LGBT writers have published in the past few days, and guidance from LGBT religious leaders.

“Don’t ask us how our weekend was unless you’re prepared to hear the answer.”—Ocean Capewell

“We are not all Orlando. We are all individuals with different experiences. I ask you to listen to those who were directly affected, but also to listen to LGBTQIA+ people of color, because this is our everyday reality.”—Alan Palaez Lopez, from Fusion

“Text or message or call your queer friends to simply ask if they’re OK or remind them you love them. Amplify our voices.”—John Paul Brammer

“We are sacred and deeply necessary to the fabric of life. We should be venerated and protected by the straight communities.”—Edgar Fabián Frías

“If your queer family member starts to discuss the Orlando shooting with you, don’t be dismissive by saying, ‘It could have happened to anyone,’ then change the subject as quickly as possible. Acknowledge that it is a blatant attack against the queer/trans people of color community, and talk to your queer loved one about how you, as a straight person, can be a better ally to the queer people of color community.”—Kate Huh

“The best thing that someone can do to be supportive is to listen. Do not proclaim. Do not declare. Do not identify with. Just be quiet and listen. If you must say something, be supportive without attempting to co-opt someone else’s grief or pain. Often when a national tragedy happens, we have a tendency to over-identify with victims and their friends and families out of our own fears and emotional needs. When we do this, we are actually doing damage to other people because we are using them to meet our own emotional needs. So no, when the Paris attacks happened, we didn’t all become French. And now with the Orlando attacks, we can express our support of the victims and their families in Orlando. But we aren’t all Orlando. And even the people in Orlando aren’t all grieving, and certainly not all at the same pain level. Instead, we can affirm our support and care for people who are mourning, who are afraid, who have been directly impacted by the event.”—Rev. Ann Kansfield, pastor at Brooklyn’s Greenpoint Church

“Be louder. Just because you’re not a part of the community doesn’t mean you shouldn’t be outraged and vocal about your outrage. These are people who died for no reason and were targeted because they’re not straight. That should make you want to shout about how messed up that is. Don’t remove the LGBT issue from the conversation. This wasn’t a random shooting, and this isn’t only about guns. Reach out and offer your support to your queer friends. This is affecting us in ways you can’t even imagine, and if you want to be an ally, this is not the time to be a silent one.”—Lane Moore

“Being an ally does not mean just mean you agree that we should have the rights we are asking for. It means that you are willing to fight for us and argue with your friends and family about this. It means that you don’t stay silent when someone says something transphobic or homophobic, but call it out and say that it’s not OK. And it means don’t tell us what you think we should do differently—we have a bigger stake in this than you do, and we have more experience.”—Moxie Peever

“Putting a rainbow on it isn’t enough. You should join us even if you’re not gay. It won’t make you gay to stand up for us, and we are the most accepting people on the planet—so don’t worry, we won’t judge you for being straight.”—Liz Armstrong

“Please challenge conservatives who are pretending they care about queers. I am really frustrated to see people who have been fighting tooth and nail against safety and security for queer and trans folks suddenly supposedly give a shit about a bunch of us being murdered. It’s been happening for decades, centuries, and all of a sudden Republicans care?”—Jen Rogue

“Reach out. Even if we don’t want to talk to you, it feels affirming to have our suffering recognized. Do the labor of educating yourself about violence against LGBT people. We’re over here trying to mourn and process ourselves—not trying to teach you about the history of the LGBT movement. Donate. If you have extra coin find one of the many giving pages or organizations and donate.”—Alex Berg

“My mom is now afraid I’m going to get shot. It would be nice if she didn’t assume that. On the converse, my friend’s parents don’t understand that she hasn’t always been safe due to her queer identity—so don’t assume that what happened at that club was an anomaly. People say this is an attack on America, but queer people—and specifically many members of this targeted population ([email protected])—have long been denied status as Americans so just think about that. Why are we/they suddenly Americans now that it’s convenient?”—Anonymous

“The lack of safety people feel after an event like this continues far into the future. We need our straight allies to reiterate their support for us and stand in solidarity with us in our communities, places of worship, and anywhere there is injustice, not only this week but on an ongoing basis.”—Justin Lee, executive director of the Gay Christian Network

“Don’t come to me crying and asking for support, for you. Let legislators know straight people care about LGBT issues too.”—Anjanette S.

“Ask, text, read about it, say their names, express your outrage as if you’re gay. Call out the bigots.”—Drae Campbell