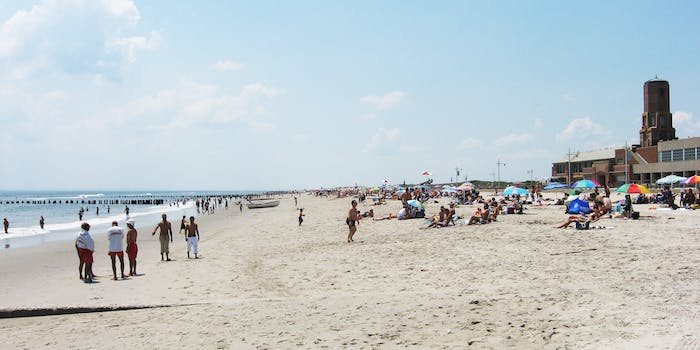 Police drag naked man off gay beach in NYC, as he screams, ‘Help me’

On July 4, police made sweeps and arrests at a gay beach in New York City, much to the surprise of beachgoers.

At the far corner of Jacob Riis Park—a gay beach that has been a notorious LGBT safe haven for decades and where women can go topless without being leered at—police descended unannounced.

One beachgoer, gay Brooklyn photographer Krys Fox, found himself the primary target of the holiday police sweep. Fox told the Daily Dot on Tuesday that he was photographing someone against the fence that borders the gay section of Riis, for an Instagram photo series he’s been working on all summer.

While shooting the photos, Fox stood with a towel wrapped around his waist. His shorts had gotten sandy in the waves, and were drying in the sun. Suddenly, the towel loosened and dropped. Before Fox could refasten it around his waist, he was tackled to the ground by a squad of police.

Fox told the Daily Dot that police had dominated the gay beach all day—”on horses, in uniform, undercover”—and were “everywhere.” But he didn’t expect to be arrested, he said, because he hadn’t done anything wrong.

“I just didn’t wrap my towel around my waist tight enough and it suddenly slipped down and I literally got sent to jail for it,” Fox said.

Riis is a National Park Service area rather than a city beach, meaning the rules are different and a casual legal status allows for more freedom. Alcohol is sold on the boardwalk, and nudity is common—so common that many in the LGBT community believe that it’s legal to go naked at the gay beach.

“I’d always heard that it was a clothing-optional beach,” said Fox. “I keep running it over and over in my head, and I can’t even begin to answer why they chose me. I wasn’t causing a scene, I was just shooting a photo of someone like I always do.”

Ironically, though, Fox said he is “shy” and “would never run around naked”—the towel slipping was an accident.

On social media, those who said they were at Riis yesterday noted that police targeted the gay section of the beach specifically, stating that there were no police on the rest of the beach. Many in New York’s LGBT community were livid, comparing the sudden police sweep to past raids of gay bars and bathhouses. One friend of the person who was arrested posted that “his naked body is seen as more dangerous than a gun.”

In multiple photos and videos shared by LGBT New Yorkers, other beachgoers appear stunned by the arrest in which around six uniformed officers and several undercover plainclothes officers carried Fox off the beach as he screamed, “Help me.” On the boardwalk, LGBT witnesses huddled together and cried out to the officers as they loaded Fox into one of the approximately seven patrol cars parked there.

Fox was taken to jail, where he says he spent about three hours in a cell wearing a hospital-style paper robe issued by the police. After receiving about five tickets for public nudity, interfering with agency function, disorderly conduct, and disobeying an order, Fox was sent home. With no clothes—just the towel that we was arrested in.

On a Facebook page for Gay Riis Beach, locals commented on increasing patrols and tickets at the beach’s gay section—noting that arrests are usually not an issue.

“Jacob Riis Park has been a safe and peaceful haven for LGBT beachgoers for decades,” said New York State Sen. Brad Hoylman, who is openly gay. “I find any harassment of beachgoers at Jacob Riis and the overwhelming display of force demonstrated by the United States Park Police yesterday to be utterly repugnant. It also seems to be an enormous diversion of resources. I’d hazard a guess that our police have more pressing concerns in this day and age than arresting a nude sunbather at a gay beach.”

“I’ve often joked that it’s the socioeconomic group that can’t afford Fire Island,” Saber wrote. “It’s historic, we need to fight for it, keep our beach gay. These arrests are homophobic, there’s no doubt there.”

Fox told the Daily Dot that he has a court date approaching, and that more than one attorney connected to New York’s LGBT community has stepped forward and offered help.