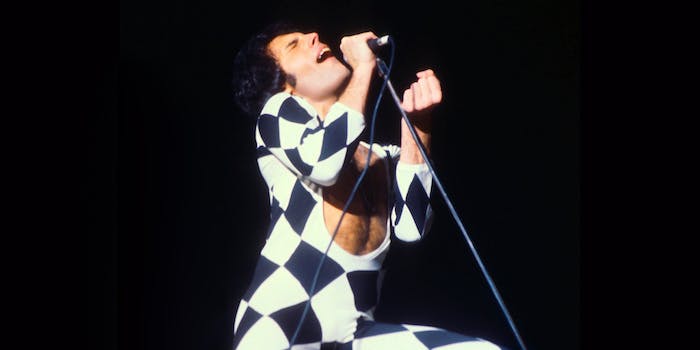 Reminder: Freddie Mercury was HIV-positive, queer, and from a Muslim country.

And he’s hardly alone in this stance. The 2016 Republican platform, formally adopted at the party’s national convention on Monday, is its most explicitly anti-LGBT platform in history: It aims to overturn the Supreme Court’s same-sex marriage ruling, overturn federal policy banning discrimination against transgender citizens, endorses a federal “religious freedom” bill that would clear the way for massive anti-LGBT discrimination, and offers support for “conversion therapy” for LGBT kids.

Given such a vehemently anti-LGBT climate, many found it odd that Trump used what’s widely viewed as a gay rights anthem as his campaign song on Monday.

Queen’s “We Are the Champions”—which followed Melania Trump’s speech at the convention Monday—was penned and performed by Freddie Mercury, an out-queer icon before there were out-queer icons as well as a man who succumbed to AIDS in 1991 during the height of the crisis. While it’s never been confirmed that Mercury wrote the song specifically as a gay rights tome, the lyrics reflect on fearlessly overcoming underdog status.

Trump’s use of a queer anthem has enraged fans and the LGBT community—and the band’s surviving members aren’t pleased, either.

An unauthorised use at the Republican Convention against our wishes – Queen

Trump–representing a party that has made the oppression of the LGBT community it's mission–walked out to a Queen song last night. #Dead

We Are The Champions blasting at the #RNCinCLE is infuriating. Got the worst platform on LGBT issues in generations? Step off QUEEN.

The band has opposed Trump using its music since he adopted “We Are the Champions” as a theme song in June. On his website, guitarist Brian May wrote that “permission to use the track was neither sought nor given.”

We are taking advice on what steps we can take to ensure this use does not continue. Regardless of our views on Mr Trump’s platform, it has always been against our policy to allow Queen music to be used as a political campaigning tool. Our music embodies our own dreams and beliefs, but it is for all who care to listen and enjoy.

Queen’s current vocalist Adam Lambert also spoke out against Trump’s use of the song, tweeting a meme that many in the LGBT community shared on Tuesday.

“If he weren’t a famous rockstar,” wrote Newsom of Mercury, “he would have probably been greeted by a wall, a really high wall, because he represented everything that Mike Pence and Donald Trump are scared of.”

It’s true that Mercury represented much of what Trump’s platform seems to oppose. The queer (he’s been alternately claimed as bisexual and as gay) musician was a Parsi Zoroastrian who grew up in India and the African Muslim country of Zanzibar. Born Farrokh Bulsara to parents from Gujarat, India, Mercury fled Zanzibar during a revolution in which Arabs and Indians were being killed. The flamboyantly queer singer died of AIDS in 1991. In a statement issued just 24 hours before his death, he came out about the highly stigmatized illness and offered these final wishes: “I hope that everyone will join with me, my doctors, and all those worldwide in the fight against this terrible disease.”

Not only is the current Republican platform notoriously anti-LGBT, Trump’s own campaign has been solidly built on anti-Muslim rhetoric. In December, the presidential nominee called for a “total and complete shutdown of Muslims entering the United States.” It’s unclear whether he included the Zoroastrian religion among his condemnation of Islam, the world’s second-largest religion after Christianity.

The Republican National Convention in Cleveland, coincidentally, takes place at the same time as this week’s 2016 International AIDS Conference in South Africa, which brings together public health leaders and HIV advocates from all over the world to discuss progressive policy and research initiatives aimed at ending the global pandemic.