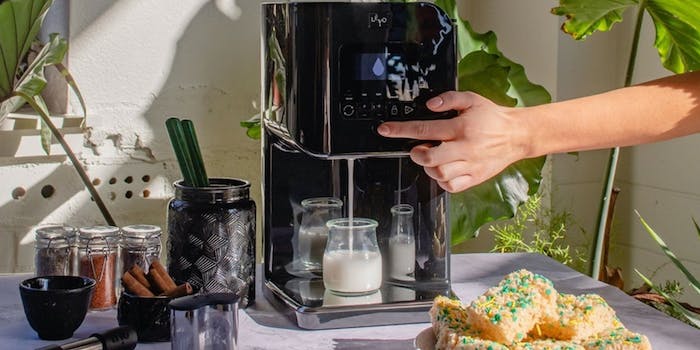 Prefer to eat your greens? Get the LĒVO II oil infuser

The LĒVO II oil infuser is smart, pragmatic, and 4/20-friendly.

Whether you’re a seasoned chef or a 4/20 enthusiast, the LĒVO II oil infuser should be your next kitchen gadget. I don’t say this just to hear myself talk. I say this to do you a favor, really.

As someone who is both 4/20-friendly and a hobbyist in the kitchen, let me be the first to tell you that this cannabutter maker is worth all the hype it receives. From weed butter to rosemary-infused olive oil and even THC lube, it can make it all. And before you say “But Marisa, I am also capable of making those things!” just know that the LĒVO does all the heavy lifting for you.

And as much of a sucker as I am for convenience, this oil infusion machine offers more than just that. Precise heating, little smell, no smoke, and a contained mess are just a few more of this baby’s benefits. Do I have your attention, now? Thought so. Now let’s get into it!

What is the LĒVO II oil infuser?

For those of you who’ve never made your own 420-infused oil before, just know that LĒVO is the purest gift of them all. No more baking your weed in the oven, standing over the stove, or suffering hand cramps from hours of stirring. You can also forget about sweating over mind-bending math equations and reeking up your entire apartment.

Instead, all you’re tasked with is gathering your materials and pressing a few buttons.

Keep in mind that this weed machine only takes care of the infusion process. In order to benefit from your infusions, you’ll need a plan. Are you into edibles? Start off with an easy recipe you’re comfortable working with. I suggest brownies or Rice Krispie treats. Once you’ve mastered that, LĒVO actually sells a cookbook you can use alongside the device that includes vegan recipes as well as some instructions for building a fully infused meal.

But if you’re looking to make something a little more extravagant, like weed lube, do your research beforehand. It may not be as simple as whipping up some infused butter.

First, you need to figure out what the heck it is you’re making with the end product. I suggest doing this before anything else so you can decide how much of the carrier you need to infuse. The ingredients you use (as well as their amounts) should be based on your recipe and personal requirements like potency.

Once you have that in order, the LĒVO is ready to take care of drying, activating, and infusing your herb. It does so using controlled heat. This allows the device to transfer flavor, scent, color, and nutrients from a variety of botanical ingredients into the carrier of your choice. You’ll want to choose something that has a naturally high-fat content (like oil, milk, or butter) so that the herb’s properties (like the sought-after terpenes and cannabinoids) have something to bind to. Using the infused carrier, you can customize recipes and optimize the benefits of wholesome herbs. Weed brownies, MCT tinctures, cannabis salves, massage oils, candles–you name it, and the LĒVO can prep it!

The device also functions alongside a smart app. The LĒVO app for mobile devices allows users to pair their weed oil maker with their smartphone or tablet. So you can program your infusions wirelessly and access the handy Herb & Oil Calculator with ease. The app will also help you discover recipes and save your favorite settings–all from the palm of your hand!

Before you load the LĒVO with your herb of choice, break it up into small pieces. (An easier and cheaper alternative to this would be purchasing shake if you can). Then it comes time to load the Power Pod (which can hold up to a quarter of an ounce or seven grams of flower). If you’re looking to increase your potency, just purchase and fill an additional Power Pod.

After the pod(s) are filled, you can insert them into your machine’s reservoir. The device has clear markings as to where your tools should go so be sure to pay attention to that. If you’re using freshly picked herbs, you’ll want to run them through the “Dry” setting first. Moisture is the enemy here, folks. Drying your herbs prior to activating them will ensure a better end product (that can be preserved for twice as long). That said, if you’re using dry herbs feel free to press “Activate” and do your own thing for the next 45 minutes.

As soon as the machine is done activating, it’s time to add the carrier and infuse! Before you do so, make sure the magnetic “whisk” is in place and that your pod is in its designated area.

Once that’s done, you can pour your desired carrier into the reservoir and set it to “Infuse” (or your desired temperature and cook time). Remember that the infusion process is also fully customizable. People living at higher altitudes will appreciate the ability to change the temperature or longevity of the infusion. Because as we know, temperatures and pressure like to play games with each other. Just remember that if you’re working with weed, you’re best off extracting terpenes and cannabinoids when you go low and slow.

The pre-set infuse option takes about two hours to complete. Meaning you’ll have time to kill. But you’ll want to hang around in case your attention is needed. So go on and take care of that chore you’ve been avoiding for the last few weeks.

“Okay, but what about the stank?!” Well, pals, hearing this may shock you. The LĒVO II device contains the weed smell as much as it contains the mess. As someone who still lives in their parents’ house, trust me, I got your back.

I used this baby on a weekend that I had the house to myself. The only time I smelled a hempy odor was when I was grinding my flower and again when it was activating inside the machine. I had two friends come over to survey the damage. One came over during the infusion process, and the other the next day. The friend that came over during the infusion said she could only smell it when she stood next to the machine and again when I opened the reservoir to clean it out. The friend that came over the day after I made the treats didn’t have a clue. Walter White has nothing on me and LĒVO.

So if you rent or live in an apartment, rest assured the device won’t rat you out. I still recommend you open the windows and get some proper airflow. Otherwise, your roommates may not appreciate the slightly funky smell radiating from your kitchen for an afternoon. Still, it’s nothing compared to making cannabutter the old-fashioned way!

As soon as the weed machine finishes up its infusion, the moment you’ve been waiting for is here. All you need to do is press and hold the button to release your infusion. I suggest emptying it into a Pyrex measuring cup or something else that’s sturdy and heatproof. You should let the mixture hang out for five to 10 minutes before employing it. But as soon as it’s chilled out, it’s ready to be added to whatever it is you’re making!

LĒVO II Oil Infuser review: Everything you need to know before you buy

Let me start off by saying that my experience using the LĒVO oil infuser was nothing but a pleasurable one. Sure, there were some hiccups, but it was nothing too mind-boggling. The process as I laid out above may seem oversimplified, but I promise you it’s not. Those really are the steps!

And the end product I was left with was superb. I didn’t find any stems or pieces of flower in my butter. It really did the job at elevating my day (wink, wink). That said, the two complaints I have really boil down to nothing major.

The first is how you have to load the pod. I course ground my flower (as the instructions stated) which was easy. What was difficult was filling the pod using nothing but my fingers. The pod is a mesh metal material, but it’s fragile. So if you grip it too tightly, you’ll bend it out of shape. (Which I did, but it’s relatively easy to reshape). And the way the pod is shaped (which makes sense given its place within the reservoir) makes getting your botanicals in slightly stressful. The entire time I wished I had a pair of mini silicone tongs. I eventually made do with my sausage fingers, but patience is key!

The second issue has to do with the LĒVO itself. In an effort to help you conserve your ingredients, I recommend that you place the container you plan to empty your infusion into under the spout before you start the infusion process. The instructions manual didn’t say to do this, which is why I have to point it out.

Only moments after setting the device to infuse, I noticed butter dripping from the spout onto the mirrored plate beneath. So I grabbed my Pyrex and placed it there. By the time I was ready to empty the reservoir, I noticed my glass collected a bit of weed butter already. Now, the amount that dripped out certainly isn’t enough to mess up a recipe. But it was enough to make a mess, so I’m glad I caught it when I did!

Where can I find this oil infusion and weed butter machine?

As of writing this, the LĒVO II herb oil infusion machine/cannabutter maker is available to purchase directly through the brand’s site as well as on Amazon. Both places have the device listed for $299. However, when you buy it directly from LĒVO you get some extra perks. Like a choice of five colors, free shipping, a 100-day free trial, and a 3-year warranty.

If you choose to buy the weed machine through Amazon, you have limited color options but will still get free shipping. However, since it’s a third-party site, it’s unclear whether or not the free trial and extended warranty will be honored.