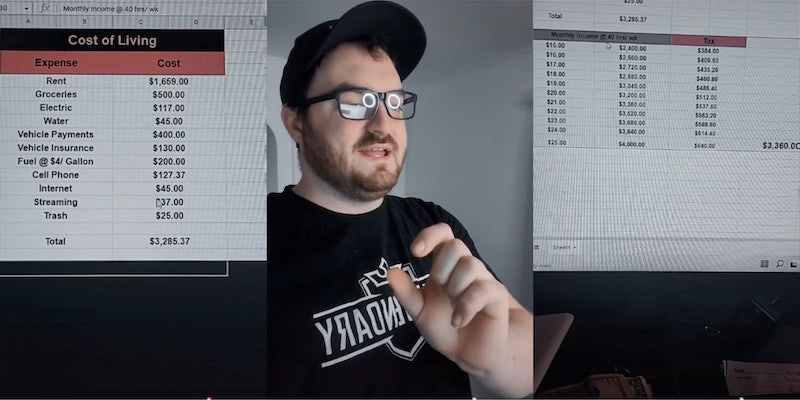 ‘If you’re making less than $25 an hour right now, you should be terrified’: Business creator shows how wages under $25 an hour don’t meet average expenses

'I make more money than I ever have in my life and I still can’t do more than barely scrape by.'

In the United States, 1.1 million workers earn wages at or below the federal minimum of $7.25 an hour, per the U.S. Bureau of Labor Statistics, and “nearly 52 million U.S. workers—or 32% of the country’s workforce—earn less than $15 an hour,” per Bloomberg.

Alongside this prevalence of low-wage work comes rising inflation, which remained “near a 40-year high in August.”

Now, a user on TikTok has gone viral after claiming that, factoring in taxes and the nationwide average costs for various aspects of life like rent and gasoline, anyone making under $25 is currently or should expect to live paycheck-to-paycheck.

“If you’re making less than $25 an hour right now, you should be terrified,” user Ryan (@digitalsolutionss) says at the beginning of his TikTok.

The video currently has over 1.3 million views.

if you aren't struggling from this yet, you will. don't wait until that happens. take action now

In the video, Ryan breaks down average costs, ranging from $1,659 for monthly rent (slightly below the median nationwide rent price of $2000), $500 for groceries, $127.37 for a cell phone plan, and smaller added costs for streaming services, among others.

After adding up all of these costs, Ryan comes to a total of $3,287.37 for the average American’s monthly living costs. Using this number, he compares the amount earned from a 40-hour work week at various wages to the weekly amount needed to meet this amount after taxes. The first hourly wage to cross the ‘breaking-even’ threshold is $25 an hour.

“Keep in mind, these expenses are factoring in doing nothing. No free time, no going out to eat, no extra miles on the car, nothing,” he says. “You didn’t have a breakdown that month, you incurred no additional hardships. This is just your cost of living and what you have to make in order to cover it.”

Furthermore, Ryan stresses that cutting out things like streaming services only saves a small amount in terms of yearly expenditure.

In comments, many pointed out that people could simply live with roommates or a parent if they needed to save money on rent. However, needing to pair or triple up in order to survive is a relatively new phenomenon.

Commenters on TikTok agreed that the number of hours and wages needed to survive in America today was simply too much.

“I make more money than I ever have in my life and I still can’t do more than barely scrape by,” wrote one user.

“I usually work close to 70 hours a week and I’m having a hard time. Health fell apart after 6 months of that,” claimed another.

“My husband works 50-70 hours a week just to support us. I quit my job in May bc childcare costs are RIDICULOUS,” added a third.

The Daily Dot reached out to Ryan via Instagram direct message.