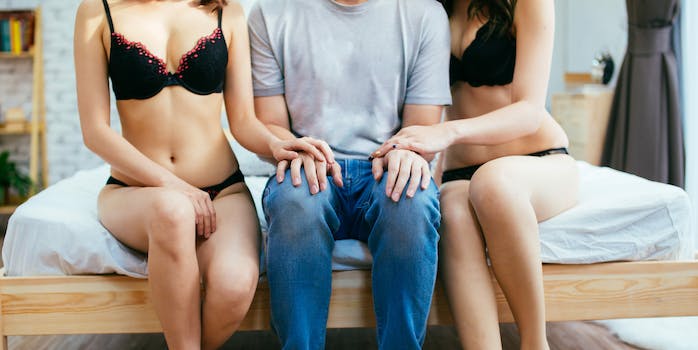 New research from the University of Nicosia in Cyprus suggests that lesbianism exists because it turns men on. Yes, a sexuality that is man-free was created for the sole purpose of male desire. It’s not difficult to imagine how the internet reacted. The findings were pilloried, swiftly and completely.

That didn’t stop lead researcher Menelaos Apostolou from continuing to defend his hypothesis, though. “My argument in the paper is this: A considerable proportion of men desire same-sex attractions in women, and this is one possible reason why many women have such attractions,” he told Pink News.

Men like it, so women do it, the paper argued. It doesn’t matter that lesbianism and bisexuality are actual sexualities, or that women who are attracted to women might not give two shits about men’s desires. According to “science,” women are into women because nearly half of the men studied said they would be turned on if their partner revealed same-sex attraction. So that must be why it happens. That must be why everything happens. For men’s approval, for men’s pleasure, for men.

While we could spend hours picking apart this patriarchal attitude and the conceptual gymnastics needed to link men’s desires and lesbianism as cause and effect, the bottom line is: Men feel ownership over lesbian attraction. They feel it over lesbian relationships. And it’s downright frightening.

It’s the same horrific mindset that means a man will leave you alone if you say you have a boyfriend. But if you’re just not interested, then you’re pestered, called names, sometimes worse. Without a man, they own you. With a man, they’ll defer.

Maybe in all these situations, protest and denial is a way for men to cope with feeling superfluous, with not feeling needed. Maybe it’s just anger and confusion being misplaced in a society that doesn’t give men the tools to process their feelings. Or maybe women are just always seen as vulnerable, easy prey. Regardless, having someone proclaim dominion over you and your girlfriend, whether through stares or aggression, undercuts your autonomy and belittles your relationships.

“I think that there is a certain subset of men who are threatened by lesbians,” licensed clinical social worker and relationship therapist Aimee Hartstein tells the Daily Dot. “They are likely to feel insecure or inadequate in their own sexuality and their own appeal. So upon seeing women who are interested only in other women and not them, it can hit a nerve. They can’t tolerate the idea of sexual rejection from anyone because they feel so worthless in their own sexuality and masculinity. For whatever reason, they are narcissistically injured by what they perceive as personal rejection.”

And they decide to act out on that rejection by asserting themselves into the relationship. It’s not a pretty sight, but it reflects those sneery come-ons that I’ve experienced while out with my girlfriend.

Then there are the men who just can’t accept lesbianism, period. “I also think that there may be another subset of men who are so self-absorbed, small minded, or narcissistic that they genuinely can’t believe that there are women who aren’t sexually interested in men!” Hartstein explains. “They need to reframe lesbianism as a make fantasy and somehow include themselves in the scenario.”

Some of them even try to do it with studies. The research may be laughable, but the attitude behind it is worrying. That the study exists is emblematic of the insecurity men feel when they don’t have power over women. That reaction, that need to claim lesbian relationships for their own—that’s the real phenomenon that needs to be studied further.