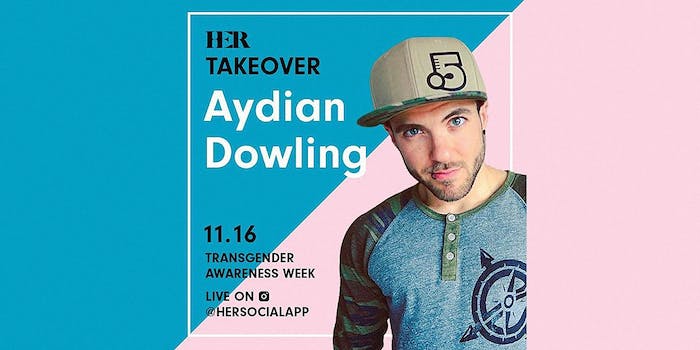 A new promotion has caused some controvery—and maybe some clarification—about the app Her.

What’s the best way to celebrate Transgender Awareness Week on one of the most popular lesbian dating apps around? By putting a transgender man front and center, of course.

Activists quickly criticized the move, saying Dowling’s appearance is somewhat insulting considering that Her advertises itself as “the most popular lesbian app” as well as “the biggest (and best!) app for lesbian, bisexual, and queer people worldwide” on places like the iOS App Store. To many in the trans community, Her’s focus on a transgender man over a transgender woman or femme shows that the app doesn’t understand its audience or trans people in general.

they don’t want to upset their largely twef user base so they’re advertising a trans man lmao i hate that fucking app pic.twitter.com/G3zSSqGKBT

I am really curious about the judgement here.

Why would you use a male model (trans or otherwise) to promote a lesbian dating app?

Wouldn’t featuring a trans feminine or gender non-conforming person be more in keeping with the spirit of the app and its community?

So! Anyone wanna tell me why a trans man is the face of #HER, the lesbian dating app, for #TransAwarenessWeek and not, I dunno, a trans lesbian? pic.twitter.com/FVgRgZUOp3

Some saw the move as Her implying that trans men are more like cis women than cis men—i.e., that a trans man is not a man; he is “femmy” and therefore can be grouped in with women and lesbians.

This guy is fucking hot but he's a guy. His face deserves to be seen everywhere but makes no sense as the face of your app for women. This reeks of misgendering and I'm not okay with it.

Because it’s not that hard to find a trans woman.

Do u just not know any trans women?

But part of the “controversy” seems to be over miscommunication in branding. Apparently, Her isn’t just for women anymore. The app’s founder, Robyn Exton, told the Daily Dot that Her has since moved on to embrace people across gender identities and sexualities beyond bi and lesbian women.

“For over a year, Her has been a platform for LGBTQ+ women, trans, non-binary, gender nonconforming, and queer folk,” Exton explained to the Daily Dot. “The name Her reflects where the company started and our commitment to make a safe and inclusive space for women, but we opened up to a much larger range of identities from the community a year and a half ago, to what we think is reflective of our community and supporting the identities that are part of it.”

Exton says Her was always inclusive to marginalized genders and has been trying to reflect that.

“We’ve had nonbinary people and gender nonconforming people in our community since day one and opened to trans men 18 months ago,” she said. “We fully acknowledge our Facebook page is titled ‘Her—The App for LGBTQ Women’ and apologize for the confusion this has caused. This is something we have asked Facebook to change multiple times to accurately reflect our business and we continue to be rejected for.”

Exton also explained that Her has transgender women Melody Maia and Eli Erlick setup for similar takeovers during the coming days ahead, along with Mason Leigh. So it’s not like Her isn’t calling on trans women to promote the app.

However, the controversy shows that brands still need to be sensitive and clear in their marketing, lest they lose their original base. For some trans women, the “takeover” was a reminder that inclusion can be hard to come by—even in the queer community.