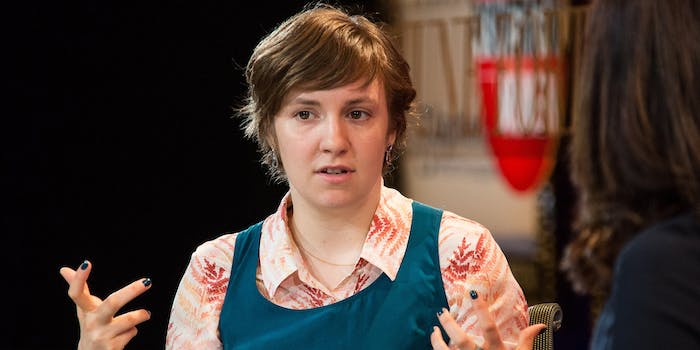 Lena Dunham says she wishes she had an abortion

'I still haven’t had an abortion, but I wish I had.'

Another day, another instance of Lena Dunham trying really hard but ultimately messing things up. This time, it’s about abortion, and how Dunham wishes she had one.

On an episode of her podcast dedicated to reproductive choice, Dunham speaks of a time she recognized her own internalized stigma with abortion. She was asked by a young girl to be part of a project about people who have had abortions, and said she’d never had one. “And I realized then that even I was carrying within myself stigma around this issue,” said Dunham. “Even I, the woman who cares as much as anybody about a woman’s right to choose, felt it was important that people know I was unblemished in this department.”

This is a fair but strange way to talk about stigma. If she really felt the need to prove she was “unblemished,” that’s certainly a personal prejudice to explore. But also it’s important to tell people you haven’t had an abortion if they want to include you in a project of people who have. It’s not an experience you can speak to firsthand, and that’s fine!

But then she follows up with “I feel so proud of them for their bravery, for their self-knowledge, and it was a really important moment for me then to realize I had internalized some of what society was throwing at us and I had to put it in the garbage. Now I can say that I still haven’t had an abortion, but I wish I had.”

Naturally, lots of people are calling her out on this.

Lena Dunham visiting fans in burn wards: "I wish someone had set *me* on fire." pic.twitter.com/7W3mAEYr0f

An abortion is often depicted as an emotionally fraught, traumatizing experience by nature. For some people it certainly is, but for others, the only emotional aspect of getting one is the anxiety-inducing process of trying to find care in a country that keeps stripping abortion rights. It does not inherently make one brave, or give someone more self-knowledge. It’s surgery. So for Dunham to say she wishes she had one is at best a misguided attempt at solidarity, and at worst makes it seem like abortion is an EZ Pass to wokeness.

The reason people who’ve had abortions are considered brave and wise is because they’ve likely had to be in the face of family members, doctors, and government officials. Our society is structured to make them act that way. But it doesn’t have to be. And nobody has to have an abortion in order to be a vocal supporter and defender of reproductive rights and bodily autonomy.