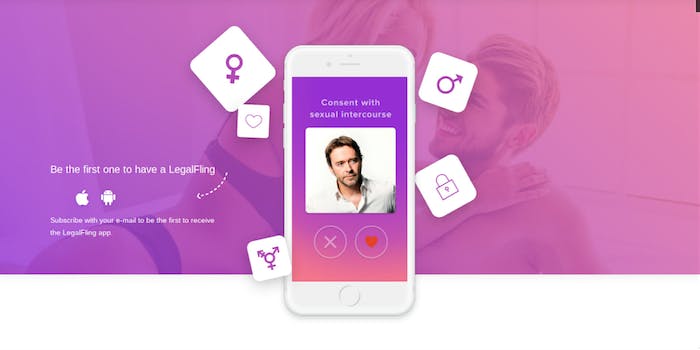 This is totally not a half-baked idea.

What’s the best way to raise awareness for affirmative consent during sex? One tech company has an idea: Try blockchain. That’s the premise behind LegalFling, a new app built entirely around legal contracts for hooking up.

The app’s Live Contract, also known as a smart contract, is where blockchain technology comes in. After both parties have signed the contract and legally consented to sex, a transaction hash and timestamp are both stored inside the blockchain, assuring the contract remains securely protected. That means others won’t find it, and no one will be able to covertly modify it.

Oh, and just because a contract has been signed doesn’t mean both parties are forced to have sex. Phew. LegalFling is specifically built to assure users can withdraw consent “with a single click.” Users can also outline if a boundary was breached, and penalties come in the form of cease and desist letters or even payments. Getting sexual consent has never been easier, right?

Suffice to say, most of Twitter agrees that blockchaining sex is a bad idea.

"since pivoting to the blockchain i've had 70,000 percent more sex"

Men and women alike are pointing out that if men have a problem handling consent without the law, who’s to say a legal contract will fix male entitlement to women’s bodies?

Proving consent, or lack of, in sexual encounters can be incredibly complex. But not if we put consent….ON THE BLOCKCHAIN https://t.co/f8K5Z37Odm

What makes you think men who have difficulty grasping the concept of consent are going to nicely ask women to sign a contract? I sense a massive blind spot in this idea…

Finally, we have discovered how to end sexual assault: Tell men that their magic internet money will be taken away from them pic.twitter.com/1aGkNU9ZPn

— Pizza is exactly the same in every city (@indierockranger) January 11, 2018

Plus, very few people are down to have sex through the blockchain.

Of course, LegalFling doesn’t advertise itself for sex workers. It’s more like Tinder meets HelloSign, turning “u up?” into “u free to sign a legal contract for sexual intercourse?” The reality is, sex is much more complicated than a unilateral “yes” at an arbitrary point in time. Consent can be revoked at any moment, which is why communication before, during, and after sex is key to a healthy sex life. And consent can be revoked in any situation, from a wife and a husband having sex to a sex worker and her client.

This also only further complicates sexual assault victims being believed in a court of law—what if a woman signs at blockchain at 6pm but decides when she meets this dude at 9pm, he is creepy and violent and she changes her mind?

“Juries tend to look for any reason to disbelieve victims, and ‘they didn’t say no/fight hard enough’ is one of the most common reasons,” Yes Means Yes: Visions of Sexual Power author Jaclyn Friedman told Lifehacker. “Under this standard, participants have no responsibility to pay attention to their partner’s body language or participation levels.”

So while blockchaining sexual consent may sound like a solution in theory, the reality is that society still largely mistrusts women who claim they’ve experienced sexual assault. Flattening consent into a signature on a legal document isn’t going to fix a broken society, even if a blockchain is involved in the process.