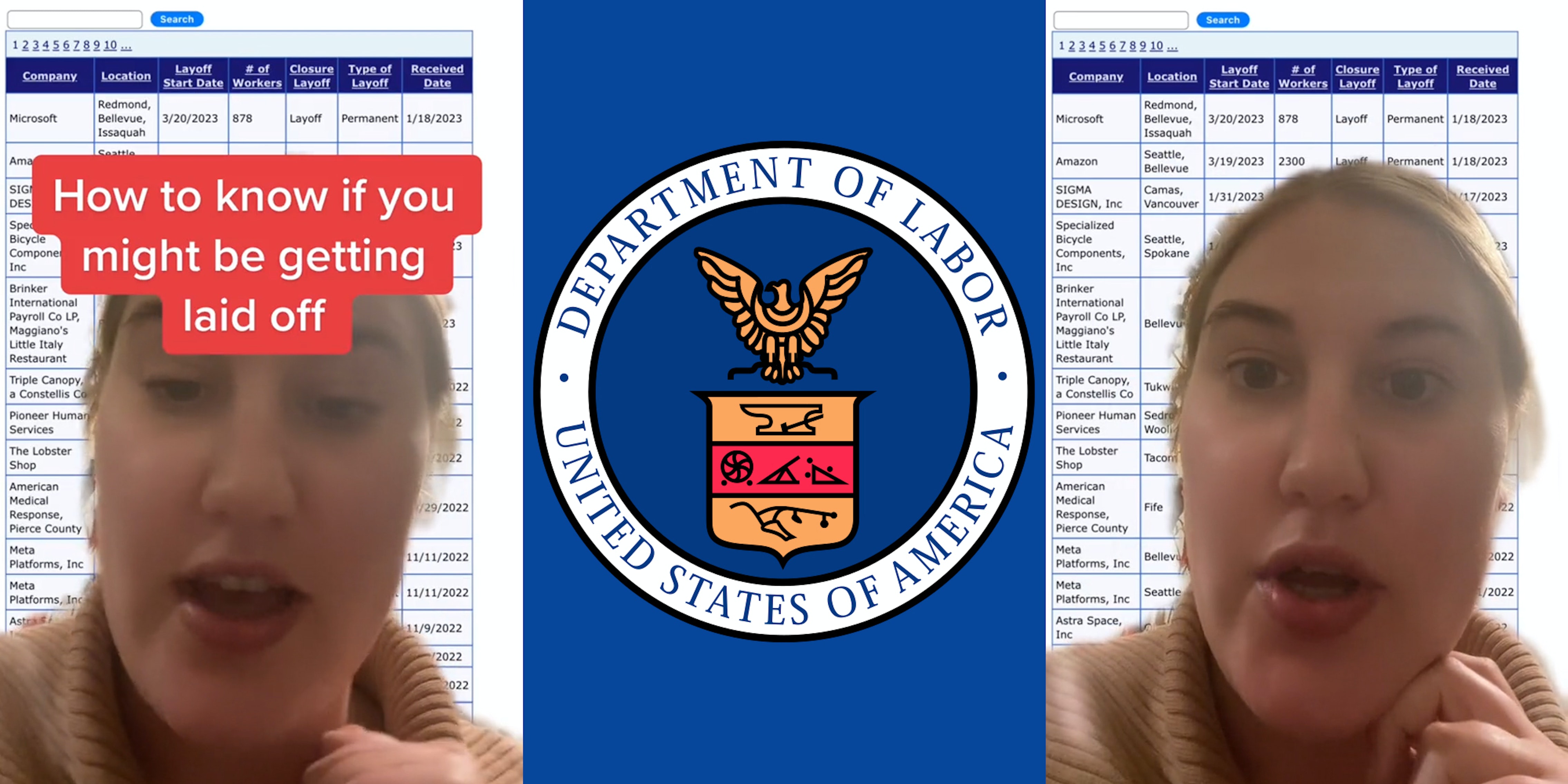 ‘You might wanna look up if you might be getting laid off’: Woman shares database you can check to see if your company is about to do layoffs

'So, we're definitely about to go into a recession.'

Recession anxiety and layoff anxiety are real in 2023, and a TikToker has taken to the platform to show that companies might indicate online when they’re about to do layoffs.

The video comes from Seattle-based creator Emma, who generated more than 589,000 views as of Saturday for her information about the Department of Labor’s Worker Adjustment and Retraining Notification (WARN) Act — and how you can use it to tell if your company’s about to lay people off.

“So, we’re definitely about to go into a recession,” Emma starts in the clip. “And if you are nervous about getting laid off and you work for a big employer, I just want to let you know that a WARN notice is something that exists in every state and you can look it up by state through the Department of Labor if you just Google it.”

Keying off the green screen image behind her, she explains, “Large employers have to file a WARN notice when they’re going to do a big layoff. So, like we can see that on January 18, Microsoft filed a WARN notice that in Redmond, Bellevue, and Issaquah, Washington, they’re going to start laying people off starting March 20. And it’s going to be 878 workers.”

The creator then advises, “So just thought I’d put that out there like you might want to look up if you might be getting laid off,” before concluding that “capitalism sucks.”

She interacted with commenters since posting the video to field questions and give more insights about the WARN Act, including creating a separate video for people in Illinois who might have trouble reaching the page showing pending layoffs.

One commenter pointed out, “Just know they only have to do a WARN notice for more than 50 employees but very good tip!”

Another person contended, “Part of the WARN process involves informing the affected group ahead of time. Most if not all the information found in these sites was already shared.”

Emma replied in the comments, “Totally, but my understanding is that some employers are pretty shitty about informing; for example, a flier in the break room no one sees.”

Another pointed out, “One major note, the other option instead of a WARN is providing compensation for those that were laid off.”

Emma agreed with that point, adding, “Yes! My understanding is the way around it is paying workers out for 60 days including benefits.”

While some looked at the finer points of the law with the creators, others came in to share their recent layoff or to marvel at the list and worry about the economic downturn.

“Looking at that website makes me sick, dude,” a commenter said, referring to the list on the green screen in the video.

“It’s so shitty,” Emma observed. “Seeing all these real people are going to be in that position.”

The Daily Dot has reached out Emma via comment on the TikTok video.