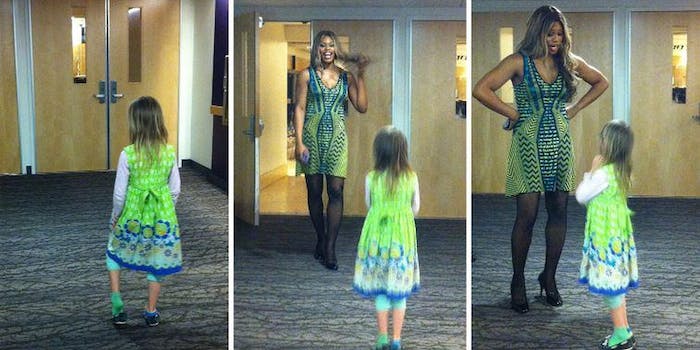 A 7-year-old transgender girl met Laverne Cox, and it was adorable

Her message to the little girl will break your heart.

The girl’s mom, Marlo Mack, wrote about her daughter’s run-in with Cox on her blog Gendermom. According to Mack, the two went to see Cox give a speech at her hometown. Shortly after the event, they were invited to a smaller reception where the Orange Is the New Black star would be making an appearance.

Here’s how Mack described Cox’s encounter with her daughter:

Laverne waved her Hollywood wave at the crowd, thanked us graciously, and then looked down at the little girl blocking her path.

Laverne smiled down at her. “Hello, M.”

I don’t think Ms. Cox saw that coming. The crowd around me gasped their approval (“Did you hear what that little girl said?”). Laverne seemed at a bit of a loss. She looked around the room. “Is anyone with her?”

I stepped forward. “I’m her mom.” Then I got tongue-tied in the face of celebrity, and forgot how to speak like a normal human. I have no idea what I said.

But M. knew what to do. She went in for a hug. Ms. Cox crouched down to meet M.’s hug at eye level, and as I frantically snapped photos for posterity, I heard her say to my daughter, “Remember, honey, transgender is beautiful.” 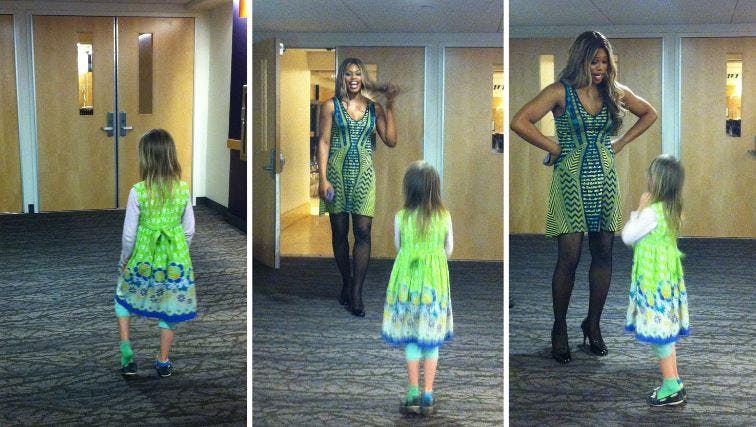