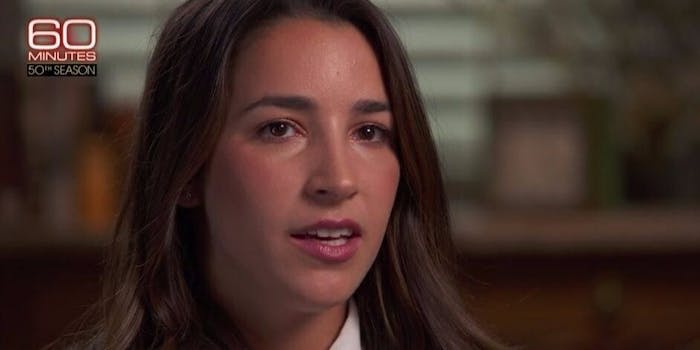 Aly Raisman says she too was sexually abused by U.S. Gymnastics team doctor

The former team doctor is being sued by 130 women.

Less than a month after McKayla Maroney said the U.S. Olympic gymnastics team doctor sexually assaulted her, Aly Raisman has now come forward to say she also was a victim.

Raisman told 60 Minutes in an interview airing Sunday that Dr. Larry Nassar began treating her when she was 15. Raisman, who discusses the experience in her new book Fierce, is now the second member of the 2012 U.S. Olympic-gold-medal-winning team, known as the “Fierce Five,” to say Nassar had molested them.

In the interview, Raisman said she wants help change the culture for future gymnasts.

“I am angry,” she told interviewer Dr. Jon LaPook. “I’m really upset … I care a lot when I see these young girls that come up to me, and they ask for pictures or autographs, whatever it is, I just … I can’t … every time I look at them, every time I see them smiling, I just think I just want to create change so that they never, ever have to go through this.”

Raisman, a six-time Olympic medalist who won three golds, follows the lead of Maroney, who wrote last month that she had been molested by Nassar throughout her gymnastics career. Maroney said she was abused beginning at 13, and it lasted until she was finished competing.

“For me, the scariest night of my life happened when I was 15 years old,” Maroney wrote in her original social media post. “I had flown all day and night with the team to get to Tokyo. He’d given me a sleeping pill for the flight, and the next thing I know, I was all alone with him in his hotel room getting a ‘treatment.’ I thought I was going to die that night.”

More than 130 women have filed lawsuits against Nassar, saying he sexually abused them as he worked with the U.S. gymnastics team for more than two decades. He has pleaded not guilty in three criminal cases in which he’s been accused of molesting nine girls.

USA Gymnastics told 60 Minutes it now requires “mandatory reporting” for any suspicions of sexual abuse. “USA Gymnastics is very sorry that any athlete has been harmed…” the statement said. “… We want to work with Aly and all interested athletes to keep athletes safe.”