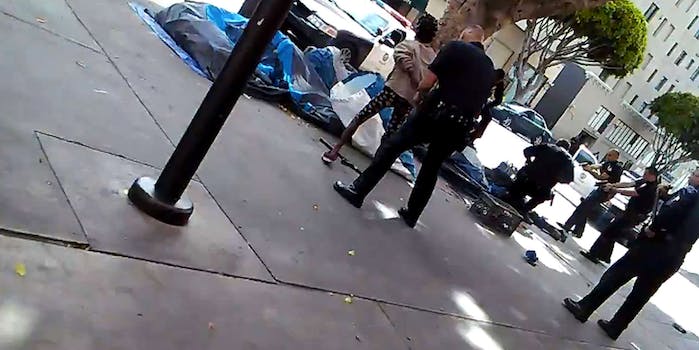 Police brutality or legitimate use of force? Either way, it's gone viral.

LAPD officers confronted a pair of civilians in Los Angeles‘ Skid Row in an altercation that left a man dead on the sidewalk. A bystander recorded the Sunday afternoon incident on a cell phone camera, and within 12 hours, that video has been watched over four million times.

The video was uploaded to Facebook by Los Angeles resident Anthony Blackburn shortly after the shooting. He posted it to his personal Facebook page, but with its privacy setting set to public. At press time, it had been viewed 4.4 million times and had over 160,000 shares on Facebook alone.

Witnesses on the scene gave the Los Angeles Times a handful of different accounts of what sparked the altercation.

One said the man, who they identified as going by the name “Africa,” had been fighting with another individual in a tent on the sidewalk when the police arrived. Another said that Africa was lying down on the sidewalk when police approached and became violent when told to get up. A third said police had come to order Africa to take down his tent.

The city has a ban on camping on the street during daylight hours.

An LAPD spokesperson told the Times that the police officers were called to the scene to investigate reports of a robbery in the area.

Law enforcement officials are investigating the shooting and hope to learn more from the footage taken by the body-mounted cameras that at least one of the officers was reportedly wearing.