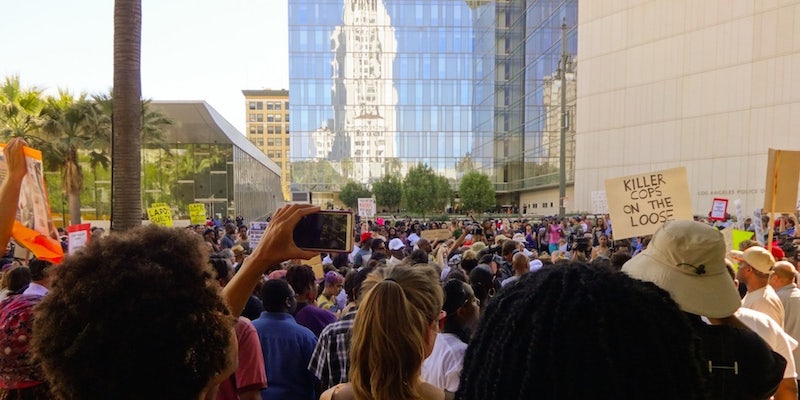 Photo by Craig Dietrich/Flickr (CC BY 2.0)

One officer's use of deadly force was ruled justified.

The Los Angeles Police Commission on Tuesday cleared one officer involved in the fatal shooting of an unarmed black man, but found that another had violated department policy.

Officials found that one of the officers involved in the Aug. 11 fatal shooting of Ezell Ford, who reportedly suffered from mental-health conditions, violated procedure by drawing his gun and using lethal force.

The second officer, whom the commission said was ultimately justified in his use of lethal force, also violated policy when he drew his weapon at one point during the confrontation.

“This is a tragedy for all involved, the family, relatives, loved ones and friends of Mr. Ford, as well as the involved police officers,” Police Commission President Steve Soboroff said in a statement.

Ford was killed just two days after the fatal shooting of 18-year-old Michael Brown in Ferguson, Missouri, and his death triggered demonstrations outside LAPD headquarters.

Police say they shot Ford after he reached for one of the officer’s holstered weapon. However, eyewitnesses have testified that the officers shot Ford three times in the back while he was lying on the ground. Ford’s death was ruled a homicide in 2014. The corner found that a fatal wound in his back was likely caused by a gunshot at close range.

Ford’s mother, Tritobia Ford, has disputed the police story as well, testifying that her son would have never reached for police officer’s weapon.

“All my son wanted to do was live,” she told the panel. “How can [the officers] not have a reason to stop him, but yet you clear them? Please, I have faith in you yet. He had been stopped before and lived. These officers did wrong.”

During public comments, the hearing was frequently interrupted by protesters. The five civilian commissioners left the room at one point while police cleared out the demonstration, reports Reuters. One man was taken outside where he was apparently arrested.

Evan Bunch was dragged out of the Los Angeles police headquarters where #EzellFord hearing was. pic.twitter.com/TLzU44iyKT

For the past two nights, roughly a dozen Black Lives Matter demonstrators have been camped out in front of the Los Angeles Mayor’s house, Fusion reports. They’ve erected tents on the sidewalk and attached photographs of Ford to the front gate.

The final decision about whether either of the officers will face discipline rests with Police Chief Charlie Beck. However, the Los Angeles Times has reported that Beck had previously urged the commissioners to clear the officers of any misconduct.