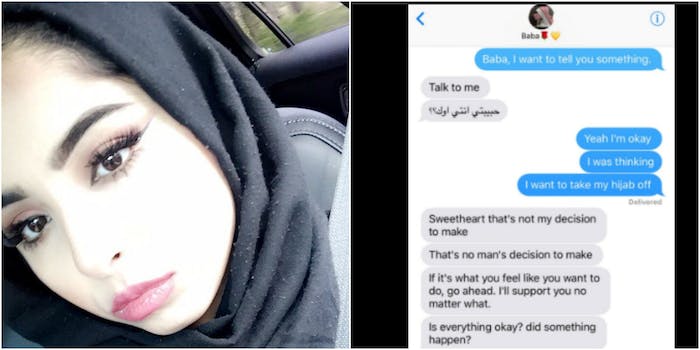 Let's see what Dad has to say, shall we?

Lamyaa is a Muslim teenager from Pennsylvania who doesn’t have time for ignorance about her religion.

A stranger in a group chat sent Lamyaa a message that attacked her for being Muslim and her choice to cover her hair. In one response, Lamyaa not only shut him down, but she also defended herself, her father, and her religion in the process.

“B*tch shut up,” the stranger in the group chat wrote while they were discussing President Donald Trump. “You couldn’t take that scarf off or your dad would beat your *ss.”

The “scarf” is referring to Lamyaa’s decision to wear her hijab, a head covering some Muslim women choose to wear for their faith. The “dad” refers to Lamyaa’s father—who she lovingly calls “baba”—in Saudi Arabia.

“The message didn’t really bother me, but I felt the need to prove him wrong,” Lamyaa told the Daily Dot in an email. “It isn’t uncommon for me to receive these types of comments as a Muslim woman.”

To show the message-sender he was wrong, Lamyaa quickly texted her father and told him she wanted to take off her hijab.

Lamyaa took a screenshot of the empowering conversation and posted it to Twitter to make a point—and to try and dismantle the stereotypes about Muslim women who wear a hijab.

Lamyaa’s tweet has received some heartwarming responses of support—but also some backlash.

“My intentions were never to speak over women that are oppressed,” Lamyaa told the Daily Dot. “Many women are oppressed and I’ve tried my best to help in any way I can to raise awareness. It is sad that it’s 2017 and women still have to deal with such horrid lack of human rights.”

Like Lamyaa said, some Muslim women are oppressed and forced to wear hijab, but many choose to wear hijab to display their faith or even to empower themselves. In both cases, women and Islam face ridicule from outsiders who may not—and choose not to—understand Muslims and their relationship between their faith and the countries in which they live.

“I have a dream that people won’t be so judgmental of women and what they decide to do with their own bodies, whether it be the hijab or a bikini,” Lamyaa said. “That should be their choice to make, not anyone else’s.”