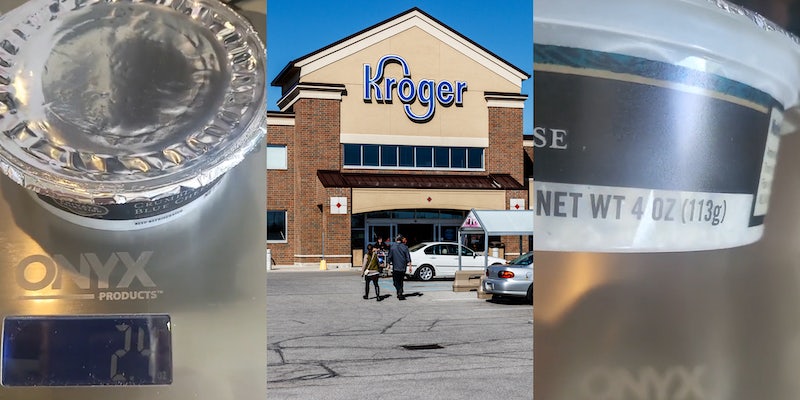 ‘They’re literally scamming us’: Customer weighs grocery items from Kroger to prove they are getting less food

Kroger is once again embroiled in a controversy over its alleged problematic business practices after a customer filmed themselves weighing their product and claiming it weighs less than advertised on the label.

The video was posted on TikTok by Liz (@sasqueen210) and currently has over 3 million views. In it, she records herself using two different scales to weigh a Kroger’s crumbled blue cheese cup. “Dude, what is going on with this, OK, seriously? It says it is 4 ounces, and I knew it felt way too light, and here it is,” she says as she places the blue cheese cup on the scale. Both her scales show the product to weigh around 2.5 ounces, even though the weight advertised on the packaging is 4 ounces.

The video quickly sparked debate as users went to the comments section to voice their outrage: “They’re literally scamming us left and right and getting away with it,” one commenter said.

Another commenter suggested customers should take legal action: “They are ripping us all off. This could be a class action lawsuit,” they said.

One commenter tried to explain why the discrepancy occurred, “It’s a 4oz capacity container, not 4oz by volume”. This reply prompted Liz to post a follow-up TikTok.

In the TikTok, she green-screens herself over a page from a publication done by the National Institute of Standards and Technology and explains customers aren’t paying for the volume of the packaging but for the net quantity, excluding the packaging and other tare material. “So if you’re paying for the tare, stop it! And report it,” she says.

The Daily Dot reached out to Liz via TikTok comments and to Kroger via press email.