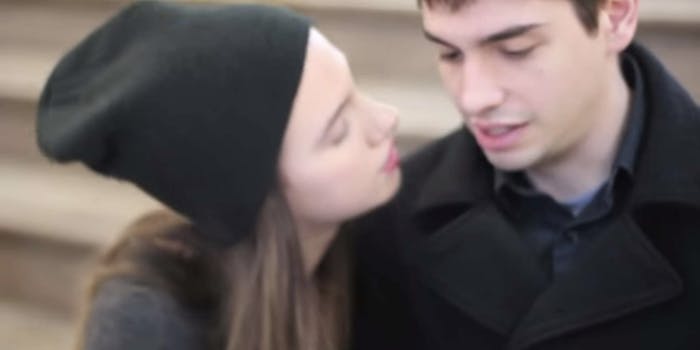 Is this video of a girl kissing strangers actually sexual harassment?

Is it romantic? Or is it creepy?

If you’ve ever been to New York’s Grand Central Station, then you know navigating the crowds of commuters can be incredibly stressful. But one girl decided to make travelers’ lives even more difficult by going up to strangers and asking them to kiss her.

The girl in question is Farah Brooks, who describes herself in her Twitter bio as a “comedy f#ck boi.” Brooks took to the city’s main hub to see what would happen if she saddled up to strangers, pretended to ask for help, and then leaned in to plant a big wet one on them.

Her victims were mostly men, but there was one woman in the mix. The reactions were nearly uniform, with one exception. See for yourself.

The Daily Mail called the stunt “a true movie-worthy moment” and People framed it as “a social experiment that ends with you getting to kiss an attractive stranger.” But what if it had been a man carrying out this so-called “experiment”? We’d be singing an entirely different tune, and the lyrics would be about sexual harassment.

Regardless of your age, gender, sexual orientation, race, etc., touching strangers without their consent is never a good idea. Especially in a place like New York, where, as Brooks acknowledges in the video, doing so could probably get you punched in the face.