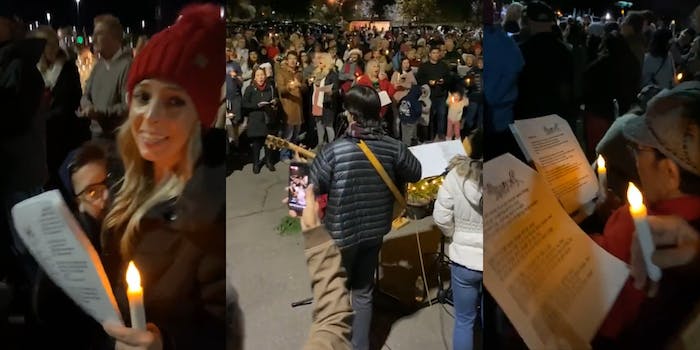 The maskless carolers sang shoulder-to-shoulder in protest of state and local stay-at-home mandates.

Actor Kirk Cameron, who is a notable pro-life Christian, is facing backlash after organizing his second Christmas caroling event in Southern California this past weekend, in which dozens of attendees arrived and participated maskless.

The maskless carolers stood and sang shoulder-to-shoulder in protest of state and local stay-at-home mandates, according to CNN Entertainment.

In an Instagram post uploaded minutes before the event started, the Growing Pains star stated that he was ready for “our Christmas caroling peaceful protest,” which was held in the parking lot of the Thousand Oaks mall in California.

“We are going to be celebrating our God-given liberties, our constitutionally protected rights at this time at Christmas to sing Christmas songs to gather, to assemble, and to sing about the birth of our savior,” Cameron said in the post.

Thousand Oaks Mall representatives posted a statement to Twitter Tuesday evening condemning Cameron’s event, stating that it does “not condone this irresponsible — yet constitutionally protected — peaceful protest planned” and that it asks the event planner to no longer use the mall as a venue.

Many others on Twitter are sharing their thoughts and criticism over Cameron’s “super-spreader” Christmas event, with one calling Cameron an “unhinged fool” and advocating for his arrest.

Others are calling out Kirk’s apparent hypocrisy for being pro-life but disregarding safety measures put in place in order to protect the lives of many. “Kirk Cameron claims he’s ‘pro-life’ but he’s holding super spreader events that will kill. Complete disregard for the lives of health care workers. Disgusting,” one user pointed out.

In response to the criticism, Cameron stated in an Instagram post days after the event that COVID-19 precautions, such as social distancing and wearing a mask, were “straight out of a scene from this scary movie about redefining life and reality.” He cited the movie The Giver, a film adapted from Lois Lowry’s novel about a futuristic society that eliminates pain, war, and fear.

Thousand Oaks Mall is located in Ventura County, which is included in the group of counties in the Southern California Region that have been inundated with rising COVID-19 cases and low ICU-bed counts. The county added over 2,000 new cases to its total count over the weekend, bringing the total case count to over 30,000 for the first time. according to the Ventura County Star. As of Wednesday, the county has recorded over 32,144 cases.