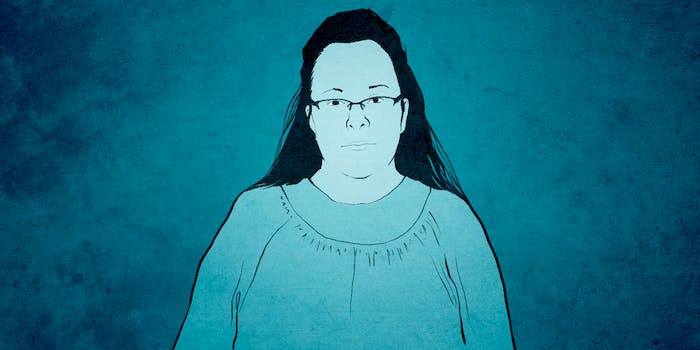 Davis won—sort of. But so did marriage equality.

The battle for Kentucky marriage licenses is finally over.

On Tuesday, attorneys for Kim Davis—who became a villain to many and a hero to others when she refused to issue marriage licenses to same-sex couples last fall—filed a motion to dismiss her case. 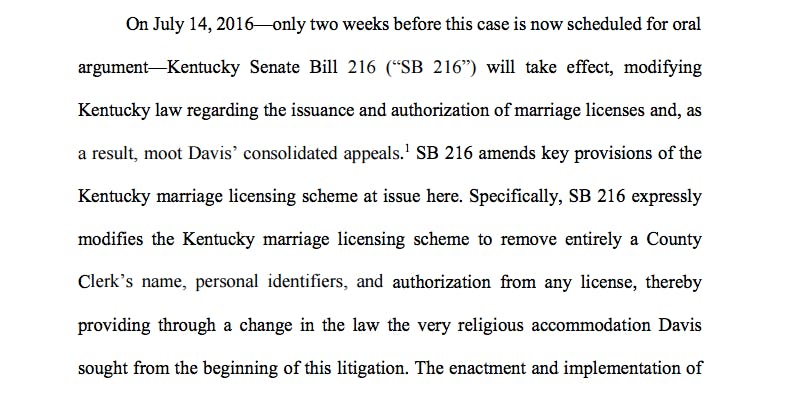 Davis was jailed last September after refusing to issue marriage licenses to same-sex couples at the Rowan County, Kentucky courthouse where she served as clerk. The case highlighted the complications and conservative protests that ensued after the June 2015 Supreme Court decision in Obergefell v. Hodges that made marriage equality legal nationwide.

Her refusal to give gay couples marriage licenses (which she said violated her religious beliefs) led to an ACLU lawsuit against her and a year-long series of legal battles, stints in jail, and even a high-profile beef between Davis, supporter Mike Huckabee, and 1980s rock band Survivor.

In response to the ACLU lawsuit, Davis was ordered to issue marriage licenses to same-sex couples. She refused to do so, instead passing that task on to her deputy clerk and filing an appeal asking the court for a religious accommodation.

According to the ACLU, which ABC News quoted, the case against Davis would still be valid even if her appeal were thrown out.

“On the eve of the one-year anniversary of the Supreme Court’s ruling, we’re pleased that same-sex couples can fully realize legal recognition of their love, including in Rowan County, Kentucky,” James D. Esseks, director of the ACLU Lesbian, Gay, Bisexual, Transgender & HIV Project, said in a statement

But not everyone was celebrating the possibility of the appeal dismissal. Morehead resident David V. Moore—whose multiple tussles with Davis went viral as she repeatedly denied a marriage license to Moore and his now-husband David Ermold—remarked on Davis’s now-moot appeal with a touch of bitterness. After all, SB 216 was a victory of sorts for Davis and other anti-marriage equality activists who felt that simply typing their names on a document was akin to voicing support.

“Our state government made the accommodation she asked for,” Moore wrote in a direct message to the Daily Dot via Facebook. “County clerks and their deputies are no longer required to sign a marriage license they disagree with. People like Kim can now pick and choose which people they would like to serve.”

On Twitter, responses to Kim Davis’s dismissal request were dripping with shade—especially by those who thought it meant the case against her would be dropped entirely.

Wow, I thought Kim Davis would have asked for facial hair remover, not the case against her to be dropped. #confused

Kentucky clerk Kim Davis is back in the news. Please avert your eyes.

Moore and Ermhold took over the Daily Dot’s @DotPolitics Twitter account during their final visit to the Kentucky courthouse where Davis had turned them away so many times. On September 4, the couple finally signed the marriage license. They married later that month in a small private ceremony, and then held a public wedding on the Morehead State University campus on Halloween.

But just because the couple finally married after a highly publicized struggle, it doesn’t mean they’ve forgotten what Davis did to them during those many visits to the courthouse.

“Kim Davis needs to be held accountable to the law,” Moore wrote. “Dropping her appeal does not absolve her of accountability.”