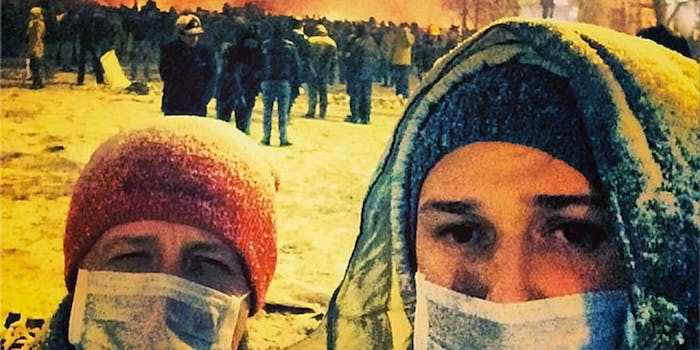 Protesters in Kiev are taking the most powerful selfies on Instagram

Against a vicious backdrop, Ukrainians have taken to posting selfies on Instagram.

This week, the world has been stunned by images of brutal rioting—bordering on urban warfare—coming out of the Ukrainian capital of Kiev. But amid the livestream of cheering demonstrators and photos of burning cars, there are some images unique to this decade.

From the chaos, dozens of Ukrainians are rebelling against the government’s draconian new anti-protest laws. They’ve also been posting selfies from the very streets where violent hostilities continue to rage.

Since Sunday, thousands of protesters have been engaged in open conflict with law enforcement officials attempting to quell anti-government demonstrations. They’ve faced rubber bullets, tear gas, stun grenades, and ominous personal threats. The deaths of at least two protesters have been confirmed, with dissident leaders claiming up to five deaths so far on their side. Hundreds more have been injured, but there are reports that many of the injured are refusing to seek medical attention so as not to face legal retribution for their involvement in the protest.

Hundreds of riot police have also, reportedly, been injured as rioters throw stones and molotov cocktails.

Against this vicious backdrop, many protesters have taken to posting selfies on Instagram. For many, it appears to be an act of defiance, standing up to a government attempting to strip them of free speech rights. Most of the protesters are wearing gas mask or other face coverings as if preparing to go into combat—which for all intents and purposes they are.

In this photo, an apparent member of the press has covered her mouth with a scarf presumably to protect her identity or shield herself from tear gas. The caption in part reads, “me like I’m breaking the law[.]”

In this photo, a pair of protesters stand near the heart of the demonstration. The crowd and raging fires can be seen not far off in the distance. There is no caption, but numerous commenters express concern and tell them to keep safe. One says, “God is with the people. UKRAINE GLORY!”

In another powerful image, one demonstrator makes a V sign with his hand. Possibly indicating either peace or a V for victory. A worried friend asks, “Are you killed?”

Protesters have occupied Kiev’s government district since late November. Initially, the demonstrators were decrying President Viktor Yanukovych’s controversial decision to eschew an economic pact with the European Union in favor of closer ties to Russia. But after a peaceful student protest was violently disrupted by special police on Nov. 30, the demonstrations turned into a more broadly focused referendum on the Democratically elected Yanukovych.

To try and end the demonstrations, the Ukrainian government, led by the president, passed a rigid new anti-protest law, enacted this week, that would punish protesters with up to 15 years in prison. This sparked the intense outbreak of violence this week.

After days of furious conflict, there is flicker of hope as a temporary cease-fire has been arranged for the president and opposition leaders to try and negotiate a resolution to their differences and avert a full-on insurrection. But even as they seek a settlement, there are new reports of cruelty by government forces, including video of special forces ordering a protestor to strip naked as they taunt and beat him.