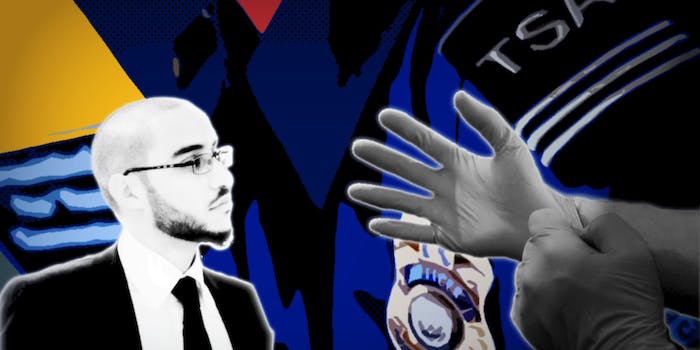 Arab-American rapper tweets about being detained at the airport

Ahmed is a U.S.-born citizen and activist who hails from Chicago and grew up in Lexington, Kentucky.

Two days before Khaled Ahmed, better known by his rapper alias Khaled M (not to be confused with DJ Khaled), was to begin a tour in the United Kingdom promoting relief for victims of the Syrian civil war, he was detained by airport security while traveling. According to Khaled, he was removed from the connecting flight before it took off and was left stranded. After informing his fans about the incident via Twitter and Facebook, he also posted that this is the fourth flight in a row he’s missed due to TSA security measures.

Ahmed is a U.S.-born citizen and activist who hails from Chicago and grew up in Lexington, Kentucky. Over the years he has dedicated himself to defending the civil rights of others, often the people of Libya, where his family is originally from. During the 2011 revolution in Libya, he was interviewed by numerous media organizations about his work, including CNN, ABC and Rolling Stone.

He has followed in his father’s footsteps, a man who was imprisoned for five years in the early ’70s for leading student protests against dictator Muammar al-Ghadaffi. His music reflects his beliefs and his family’s past. In the song Can’t Take Our Freedom, Khaled says, “This ain’t about my father getting retribution or my uncle getting tortured with electrocution, other uncles getting hung in public executions, just simply coming out with the best solution.”

They pulled me off the plane

How do you just pull someone off a flight during a connection and leave them stranded in a random city?

There is ALWAYS someone who has it worse. NEVER allow yourself to become a victim.

How arrogant of me to assume I’m allowed to fly in the country I was born and raised in.

When I got pulled off the plane 2 days ago, ppl were giving that proud “victory smirk” like the authorities prevented some plot

She didn’t even ask what countries I’ve been to, anything. Just the fact that I’ve been overseas means I’m “definitely affiliated”? #TSA

Khaled cited his need to speak to an attorney but promised to reveal information about his TSA troubles to the public later. He did however infer that he believed the actions taken by airport security were caused by his work as an activist, tweeting, “Speak truth and an oppressor will utilize all tools to silence you.” According to his Twitter account, the TSA threw away many of his personal belongings, including a CD, which he says they found to be “explosive.” Khaled’s fans were quick to point out online that his raps are, in fact, the bomb.

@thisisKhaledM Cause your music’s THE BOMB! hahahahah (We can laugh at this later).

It’s not uncommon to hear Americans express their displeasure with the Transportation Security Administration (TSA). Critics argue that these Homeland Security tactics are invasive, unnecessary, and largely based on racial profiling. Others point to the fact that since it was founded in 2001, the TSA has yet to foil a single terrorist plot. Advocates of the agency claim that the implementation of security pat-downs and airport body scanners are precisely the reason another tragedy like 9/11 hasn’t occurred.

The TSA is scheduled to implement new security protocols soon that would depart from their usual MO. It estimates that a new “risk-based assessment” of travelers will allow more than a quarter of American airline passengers to bypass intrusive security checkpoints. After being detained four times in a row and always cleared of any wrongdoing, Khaled M should be one of the first people added to the new Homeland Security green-light list.