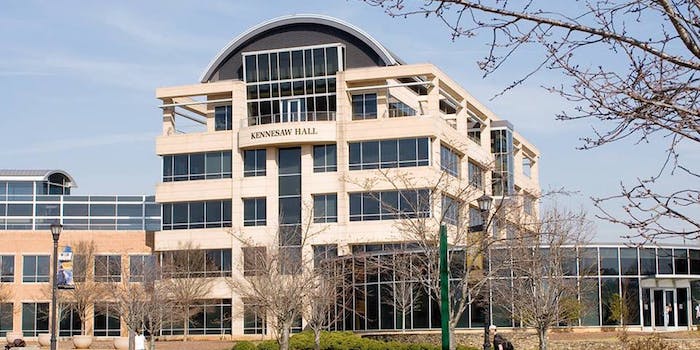 Was this incident at Kennesaw State University motivated by racism?

University officials are 'keeping an open mind' about the accusations.

A viral video of a staff member at Georgia’s Kennesaw State University threatening to call security on a student has sparked an online debate over whether the incident was racially motivated.

The 30-second clip at the center of the controversy, posted by KSU student Kevin Bruce, received more than 7,200 retweets by Friday afternoon. The incident also spawned the trending hashtag #ItsBiggerThanKSU.

The video shows Abby Dawson, an academic advisor at KSU’s WellStar College of Health and Human Services, accusing Bruce, who is black, of harassing the advising center coordinator, Margaret Tilley.

“I can call security. You can fill out the form just like everybody else does,” Dawson tells him. Bruce responds that he’s waiting to speak with someone and denies that he’s harassing anyone.

“Sitting here until someone’s available is harassing them,” Dawson responds before walking away, apparently to contact campus security.

On Wednesday night after posting the video, Bruce appeared to accuse the university and Dawson of racism in a series of tweets. “These folks racist lowkey.. but it’s all gravy,” one said. “As always .. she sound racist,” said another, tweeted two minutes later.

A KSU spokesperson told the Daily Dot on Friday that the university is still working with Bruce to review his concerns, and that they were unaware that Bruce had accused Dawson of racism. The spokesperson pointed out a tweet dated May 14, in which Bruce says: “Guys it’s not a racial issue. Every race has this problem.”

The university would neither confirm nor deny that Bruce’s race played a role in the incident. “We’re keeping an open mind,” the spokesperson said.

The Daily Dot reached out to Bruce via Twitter, but had not received a response by press time.

An additional statement from KSU issued on Wednesday says its officials “take seriously all student concerns and are dedicated to promoting a positive academic advising experience for all students.”

Update 5:00pm ET, May 15: KSU has placed academic advisor Abby Dawson on administrative leave pending an investigation. According to WSB-TV, KSU student Kevin Bruce has admitted to a previous incident with Dawson.