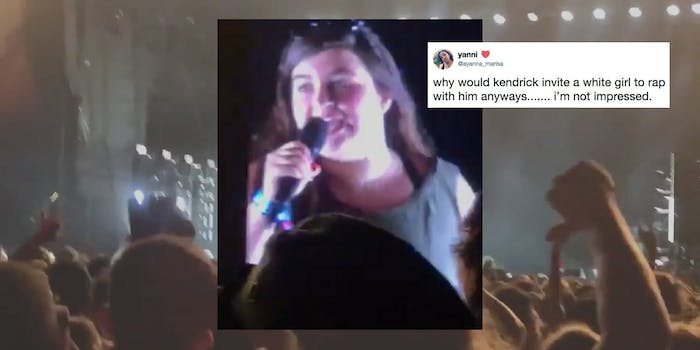 Let me be perfectly clear: Under no circumstance is it OK for a white person, nor a non-Black person of color, to ever say the N-word. There will never be a moment in which doing so would be appropriate. Even if it’s written into an artist’s song, which they ask you to rap, in full—you do not use that word.

However, it would appear that the internet is siding with a white woman who did exactly just that during Kendrick Lamar‘s set at last weekend’s Hangout Music Festival. During a part of the show where Lamar pulled fans onstage to rap “M.A.A.D City,” which uses the N-word several times, a woman who only identified herself as Delaney used the word at least three times before Lamar cut her off, told her to stop using it, then let her try again.

In videos taken of the fan’s offensive fail, Delaney asks Lamar if she’s “not cool enough for you, bro,” before he tells her that he stopped her because she needs to “bleep one single word.” Once she realizes (read: gets called out on) her use of the racial slur, she apologized, then asked if she used it. While the audience booed at the fan and cheered against Lamar’s suggestion that Delaney try again, he allowed her to proceed.

Regardless of Lamar’s humility at her use of the word, Delaney botched it, missing a line in the opening and throwing off her entire first verse.

Delaney’s performance did not fare well online, and people tore her down for knowingly using the N-word in the first place.

okay, the one thing i'll say about kendrick and that concert: it remains amazing how rappers can pack in thousands of folks who love them but simultaneously have little to no interaction with black people in their actual lives.

People upset @kendricklamar called out a fan for saying the N-word…
Dear white people,
How about you just don’t say that word??

Some turned the situation around on Lamar, stating that he set the woman up by choosing her to rap along to this particular song, alleging that he embarrassed her on purpose.

I ain’t gonna lie I can’t ride with Kdot/y’all on this one, he invited this white girl on stage to rap his song that says nigga multiple time, she’s caught up in the moment so of course she just raps the same lyrics should would rap if she was home by herself #KendrickLamar

Hot-take critics used the moment to push for Lamar and other Black artists to stop using the word in their songs. If they didn’t want white people like Delaney for using the language, they argued, they shouldn’t use the word in their own work to give them that opportunity in the first place.

Others responded with memes or turned the situation into a meme itself.

This is your brain on privilege pic.twitter.com/08A7GsRFqj

why would kendrick invite a white girl to rap with him anyways……. i’m not impressed. pic.twitter.com/Ic7JvsJCto

Kendrick Lamar bringing up a girl on stage to sing HIS song then stopping the music and getting pissed that she sung HIS song and kicking her off stage has to be the fail of the year so far! #KendrickLamar #Fail pic.twitter.com/a1hznqVJ5a

“Whether Black artists should continue using the N-word” is not a debate I can weigh on. But regardless of how Delaney’s use of the word may affect its existence in the entertainment lexicon moving forward, she should never have used it in the first place.

The fact of the matter is, being a Lamar fan and knowing the lyrics to the song, Delaney knew that the N-word would be featured throughout. And once Lamar cut the track and told her she needed to “bleep” the word, Delaney’s feigned ignorance that she had even said it in the first place. Saying, “Oh I’m sorry, did I do it?” shows that she knew it was wrong of her to use the word even in the context of the song.

Then she tried to excuse herself again, saying she just rapped the song the way that Lamar wrote it as if to say, “Those are your lyrics! You made me say the words!”

Even if she appeared apologetic after he called her out, it’s clear Delaney made an active decision to say the words. Not thinking she’d actually get called out, she found herself grasping at straws to deflect from the idea that she could actually be a racist person instead of just ignorant.

The richest part of the story that has appeared to go unnoticed by Lamar’s critics is that Delaney wasn’t even the first white person to go up on stage that night to rap the same song with Lamar, let alone the only person. The white man who went on that night appeared to shut down altogether once on stage, preventing him from having the chance to use the racial slur.

After him, another man identified as Rohan Ghosh rapped the entire song without uttering the word once. This man’s performance was absolute fire, making it clear that fans such like Delaney have absolutely no excuse for not omitting the word from their rhymes.

Not enough people talked about @Rghoshy at Hangout but hes my new idol pic.twitter.com/wrpMzVb6Zp

I was at the Kendrick festival set where that white girl blithely rapped the n-word (& also couldn’t rap any of the rest of the song) & I just wanna shout out this guy Rohan, who f u c k i n g crushed it with ZERO awkwardness skipping every slur https://t.co/X91tHqrbku

Rohan won this round of Kendrick karaoke, hands down. The fact that Delaney followed his performance means that she saw a solid example of what to do when choosing whether to use the word as someone who is not Black and completely rejected it.

Regardless of the internet’s ping-ponging criticism from Delaney to Lamar, it is clear that no one wants white people uttering the N-word in the first place.

#KendrickLamar it baffles me that people are blaming Kendrick for that white girl saying the "N" word. White people be so pressed to use that word. It's never ok!

My fellow white people: Do better.