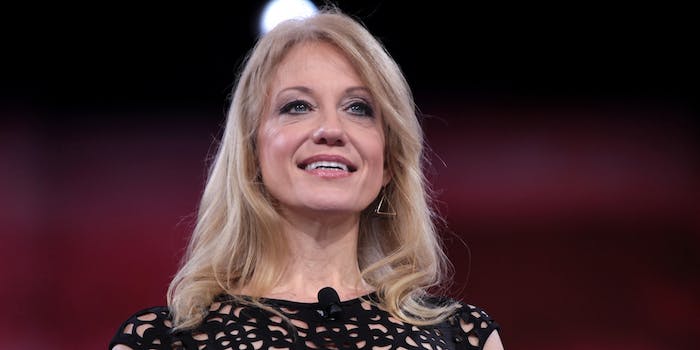 Conway has a history of making controversial statements.

It’s no secret that Donald Trump has a problem with women, but those leading his campaign may not fare any better.

The Republican presidential nominee has called women “fat pigs,” disparaged a woman for needing to pump, and commented on the looks of women like Ariana Huffington and the contestants on his reality show The Apprentice.

We now know this problem extends to other people on his staff. This month, Politico reported that Stephen Bannon, CEO for the Trump campaign, was charged with domestic violence in 1996. (The charges were ultimately dropped after his ex-wife did not show up in court.) And now, Kellyanne Conway, Trump’s campaign manager, is in the spotlight for making problematic comments about rape culture.

In a segment for the PBS show To the Contrary, Conway noted that if women were as strong as men, rape wouldn’t exist.

Rape isn't about men being physically stronger than women, @KellyannePolls. Please stop saying things like that. Thanks.

Conway’s comments fly in the face of the sexual assault statistics. For example, the National Crime Victimization Survey reports that between 5 to 14 percent of rape and sexual violence victims are men.

This isn’t the first time Conway has made controversial statements. In 2008, she was called out on Larry King Live for saying that Hillary Clinton, now Trump’s Democratic challenger in the general election, wanted then-rival Barack Obama to “sit on the back of the bus” of her presidential ticket.

And in 2005, Conway called homosexuality a “corrupting” influence on children. She made her comments after PBS aired a show titled Postcards from Buster, which featured a lesbian couple.