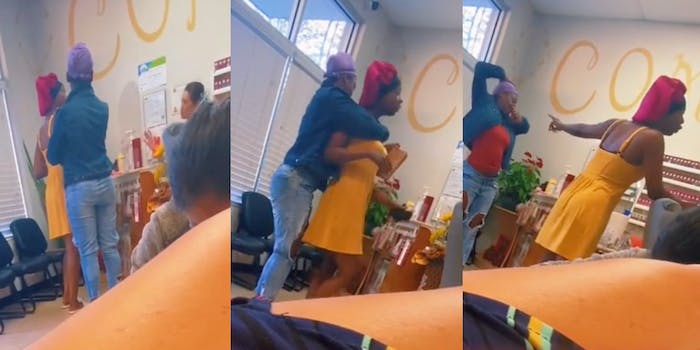 A woman was captured on video flying off the handle in a nail salon after demanding the salon fix her nails for the fourth time in a week.

A nearby TikToker managed to capture the encounter as she was attempting to “relax” and enjoy a pedicure. The resulting video was posted to @blowfish76‘s page—where it remains their only video—with more than 2 million views and 161,400 likes.

An argument is already underway as the TikTok begins. It sees a clearly irate woman, dubbed a “Karen” by commenters, angrily informing an employee that she recently got a full set at the nail salon. She demands that someone fix her nails, getting increasingly upset as the salon employee tries to diffuse the situation. A text overlay sets the scene, informing viewers that “they fixed her nails 3 times for free in the last week. She claimed they broke just by scratching her leg.”

When the employee apologizes for previous issues they’ve had with the woman’s nails, it completely sets her off. The woman, still shouting, begins throwing things. She knocks down the plastic partition separating the salon employee from customers and becomes so visibly upset that her friend begins restraining her.

This prompts salon employees to call the police. They lock the door to keep the woman inside, and a woman can be seen dialing on her cell. The nail tech working on @blowfish76’s toes is the quiet and unassuming MVP of the video, as she continues to diligently work away while chaos unfolds behind her.

Meanwhile, the woman claims that “every other day my nail has broke,” while the employee attempts to explain the situation. The woman isn’t hearing it. She continues to bellow demands, struggling with her friend—who continues to restrain her—and boasting that the police don’t scare her.

Bafflingly, the woman appears to blow up more every time the salon employee attempts to apologize. She fixates on the fact that she spent her “hard-earned money” to get the initial nail job and refuses to acknowledge that, after three free attempted fixes, the nail salon has more than made up for her money spent.

People were stunned by the level of anger displayed by the woman over a manicure. Several people suffered from second-hand embarrassment, noting that they “don’t understand how people can act like this and not be embarrassed.”

Many latched onto the woman’s aggressive actions and multiple threats.

“She speaks to the employees like that/threatens to beat them and then she’s surprised they won’t help her,” one commenter noted.

Others wondered why, if her nails had broken three times in a single week, she would want the salon to fix them anyway.

“3 TIMES,” one viewer wrote. “After the first time breaking and getting them fixed I never would’ve went back. There’s nail shops EVERYWHERE!!”

When one commenter asked, “What does acting like this get you?” @blowfish76 helpfully responded “a trespassing warrant.”

@blowfish76 could not be reached for comment by the Daily Dot.