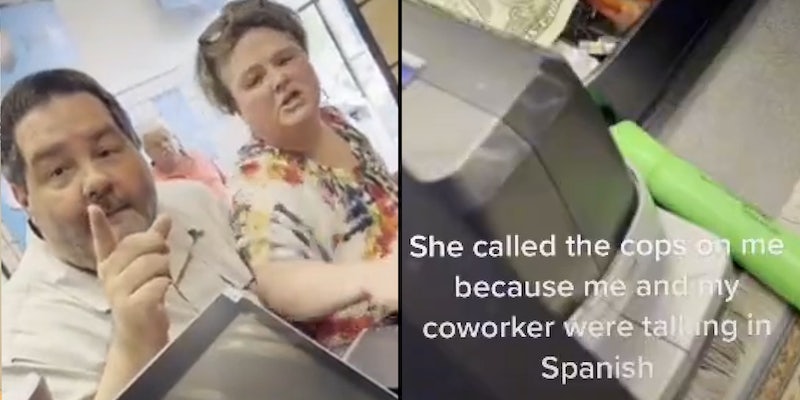 'Do not f*cking record me.'

A viral TikTok shows a couple yelling at post office workers. They react strongly to one of them speaking in Spanish. The text overlay says they called police over it, in fact. But it paints an incomplete picture and there is no police involvement in the clip. Here’s what we know.

Isaac Sosa (@tat2sosa) posted the TikTok on Thursday. The clip is filmed from the worker’s POV and shows the two customers berating the worker. The post office worker tries explaining that they “already spoke with my boss” and apologizes to the customers. It’s unclear about what.

The couple is being called “Karen and Ken” online.

“OK, well why are we speaking Spanish about her?” the Ken asks. It’s possible the man was upset about the workers speaking to each other in Spanish in front of him to mask what they were saying.

“Do not fucking record me,” the Karen yells before slamming the worker’s phone at the desk.

In the comments, Sosa tries to out the couple as Texas residents. He seems to have no personal connection to the incident, but just posts viral clips on his profile. “Yea that’s why this is still going on till this day.. you sweep it under the rug and they think it’s ok to discriminate innocent working woman,” commented Sosa.

Commenters on TikTok defended Sosa. “You tell them, this is America, the land of the free to speak whatever language you want,” one TikToker wrote.

“My answer would have been BECAUSE I WASNT SPEAKING TO YOU,” another wrote.

“And then people have the nerve to this country is not racist. For the people in the back this nation has no official language,” another TikToker commented.

It’s true—the United States does not have an official language.