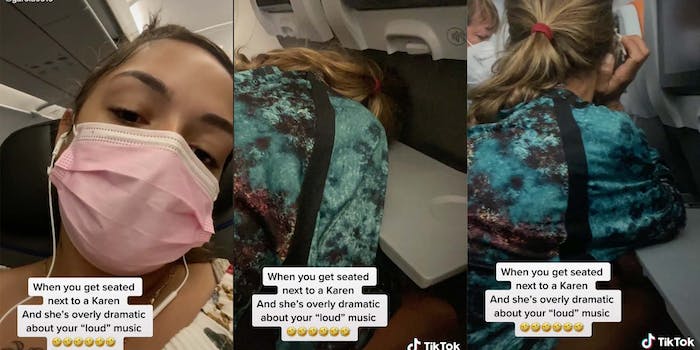 Who's really to blame?

In a TikTok posted by @tumamichai, the woman sitting next to her on a flight puts napkins over her ears and rests her head on her tray table because @tumamichai’s music was “loud.”

@tumamichai, who was wearing Apple headphones in the video, deemed the woman a Karen. It’s been viewed more than 543,000 times.

But not many agreed with @tumamichai in the comments. Some even thought she was the Karen in the situation shown in the TikTok.

“If I can hear your music when you have headphones in, it’s probably too loud,” wrote @icodyonline.

“Being on a plane you have to respect everyone else around you,” agreed @coribug12.

@tumamichai didn’t seem to be too bothered by the criticism in her comment section, though. She responded to @jeaniesiler’s comment with laughing and kissy face emojis, and liked many of the comments that disagreed with her video.

The TikToker had supporters commenting on the video as well.

“People in the comments forgetting the noise of the engines is clearly louder than some Apple headphones,” commented @pleasenodontplease.

“That’s her fault,” wrote @kidzuniversity. “She should have brought headphones or earplugs.”

The Daily Dot has reached out to @tumamichai via TikTok comment.